So I was in the Netherlands for almost a week recently. And somehow, there's a nagging feeling inside me that tells me that I didn't enjoy the whole trip. And after thinking about it for a bit, I realize why, at least, partly.

See, I was excited that I would add another country to my visited countries list. It will be No. 26. And yes, it got added, however, there didn't register a sense of foreignness to it. I guess, I was expecting some culture shock, but the shock didn't come.

I bought a Lonely Planet Netherlands guidebook. I read the relevant chapters (Utrecht and Amsterdam). I knew what I would be seeing, and I had a list of the things I wanted to visit. I even bought a Dutch phrasebook. After all, why would I expect everyone to understand English, that would be imperialist and haughty of me to expect such a thing. So I came prepared.

However, sad to say, I never even used my phrasebook even once. Everyone just switched to English the moment they saw me. Like I said, I was expecting a culture shock, but it never came. Instead, what came was a realization, not about the Netherlands, but about Germany, the country I am currently living in. I realized that Germany feels more foreign to me, than the Netherlands. I can go live in the Netherlands without speaking a word of Dutch, and life would be fine, but knowing German is definitely to my advantage when I live in Berlin.

And Amsterdam, well, it might be a cool city in other people's opinions, but it's definitely not my favorite. There's a part of me that feels it to be rather quite artificial, with plenty of "sights" and things to do just existing because there are visitors. I mean, why would you go all the way to Amsterdam just to visit Madame Tussaud's and see a bunch of wax figures? Amsterdam is loud and is full of glitter, but I felt like it is less original and home-grown, and more of a cash crop. In other words, they are there only because tourists flock to the city. That being said, there are several attractions that are unique to the city, which I have visited, and enjoyed. It's just that the tourist traps tend to be quite prominent here.

Anyway, perhaps I made a mistake in approaching the Netherlands. I deviated from my rule of not expecting anything. Instead, I wanted a foreign experience, and the Netherlands isn't foreign enough. I guess I am not a run-of-the-mill American who doesn't even have a passport and hasn't stepped out of one's home soil. I guess deep inside, I wanted an adventure, something I truly experienced when I was in Guatemala in January of 2012, and I went to the Netherlands with that mindset, when all I am going to the Netherlands for is a conference in Utrecht and a weekend in Amsterdam.

Looking back, I did notice quite a few differences, but they were rather subtle. People seemed to prefer leaving their windows open, no curtains, for the world outside to see. I've peeked into quite a few living rooms and dining rooms while I was there. Here in Germany, shutters close the view when your window is on the ground floor, while in the USA, people use curtains a lot. There's definitely a different architectural style, although what it is I cannot pinpoint.

Anyway, my first foray into the Netherlands may not have been the best, but I am more than willing to give it a second chance. After all, it's quite close; Berlin to Amsterdam is just 360 miles, less than the distance between Buffalo and Boston, to give a frame of reference. So we'll see, maybe, my next visit would also have better weather than the rainy days I have experienced while I was there. 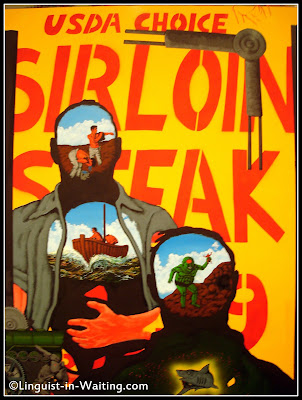 (Sirloin Steak, from my Art Institute of Chicago Series)