The other day, I realized that my tastes in music were gradually changing. This realization came to me when I discovered new music, and realized that they were quite different from the type of music that I have been listening ten years ago.

See, I have been digging indie-folk and indie-rock lately. It started when Regina Spektor entered my ears, with her single "Fidelity". Since then, I have been distancing myself from the heavy metal and rock genres. When I was in Utrecht, I was in a cafe, and I couldn't leave without asking the barista what music was playing that time. It turned out to be Passenger, which is indie-folk. So I added him in my Spotify account. Aside from that, I also discovered 77 Bombay Street, which is indie-rock/folk-rock.

So yeah, I think my tastes have mellowed a bit. This is me comparing to my CDs I owned ten years ago. I remember listening to various artists like Nickelback, Tantric, Breaking Benjamin, and even Soil. I remember my parents complaining whenever they would hear my music. My dad characterized them as pots and pans banging.

Now I don't buy CDs anymore, mostly because whenever I am connected to the Internet, I can easily use my Spotify account and stream music from there. I used to use Pandora, however, they are not available in Germany.

I guess that is what usually happens when one ages; even in clothing style, I used to wear just all black when I was a sophomore in college. Yes, I had a black phase. Now, I wear more colors than just black. And so it goes with music as well. 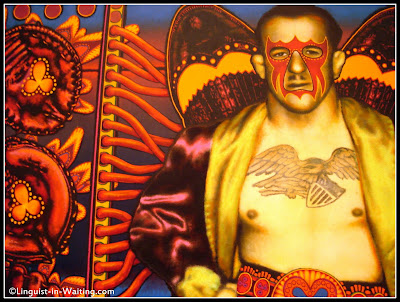 (Weirdo, from my Art Institute of Chicago Series)