So I noticed that The Amazing Race has a new season this year, Season 22. However, unlike the previous seasons, somehow I am not excited by the prospect of watching it anymore. In fact, I haven't been watching this reality TV show since the last season. Sure, I still go to Wikipedia and read every now and then where the teams went, but that's about it.

So why did I lose interest? Well, there are several reasons. First, I am getting sick of seeing stupid Americans with low travel IQ zooming around the world. Sometimes I feel that they shouldn't be given the privilege of traveling around the world like that when they don't know the first thing to traveling. I also found it annoying that most of the time, the traveler's personal issues dominate the show. Of course, I see why this is the case, because more people are interested in seeing these Americans fight and shout at each other while they are in a foreign country, being stared at by numerous locals. I don't know, I believe in the anthropological approach to travel, where one constantly tries to minimize the change that is brought upon by one's visit. But these teams just raunchily and loudly blaze through their destinations.

Second, I find their choice of destinations not so exciting anymore. For example, there have been 21 complete seasons already. But I feel like almost every season passes by either China or India. Why is that, when there are other countries worth visiting? I actually checked, and found that there are only 5 seasons (Seasons 3, 8, 9, 15, and 19) where they didn't visit India or China. On the other hand, there are countries that I think are worth visiting but they haven't yet, like Bulgaria, Guatemala, Colombia, and Laos. So yeah, every time I find out where they are heading, I think, blah, yeah, sure, that's easy.

I guess it shows that I see a vast difference between my attitude towards travel and the typical American audience. I think I have been well-traveled; at my age, I have been to plenty of countries, more than the average Filipino, I think. By the time this article goes online, I will have visited a total of 28 countries, and that number is still projected to grow by the end of this year.

So yeah, I guess this is my way of saying that my travel IQ is high, higher than the typical person. Heck, I am one who complained about Amsterdam when I found it to be not foreign enough for my taste. Maybe I am just being elitist, but hey, this is my blog, right? 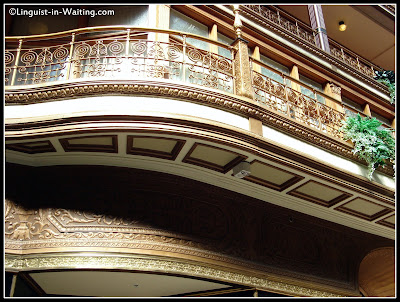 (Underneath the Balcony, from my Cleveland Old Arcade Series)