Last month, I attended the 4-day 35. Tagung der Deutschen Gesellschaft für Sprachwissenschaft, or in English, the 35th Annual Meeting of the German Linguistic Society. It was held in Potsdam, which is a short S-Bahn ride away from Berlin, so it felt unprofessional to be a linguist in Berlin and not attend the largest meeting of like-minded individuals in the country. It was held from March 12 to 15, but I didn't attend the first day, as there were only workshops that dealt with topics that I didn't have much interest on. After all, I am a psycholinguist, not a computational linguist. So for this entry, what I am considering Day 1 was my first day, March 13.

There were several parallel sessions, as well as two plenary talks. I attended both plenary talks, and attended several talks from the session dealing with narration in spoken and signed languages. The first plenary talk was by Pia Quist, who gave an interesting talk on stylistic variation among multilingual youth in Scandinavia. I am not a sociolinguist, so there were aspects of the talk that I couldn't be more enthusiastic about, but it was still educational in the sense that I get to know what new developments are with respect to the other parts of the field. After all, it is always good to talk to outsiders, people who work outside of your area, and who knows, that might be enlightening and move your research forward.

The second plenary talk actually emphasized that. Ian Roberts gave a talk dealing with the long debate in linguistics between form and function. There are the formalists who battle against the functionalists, and though most of this debate happens within syntax, it does spread to other linguistic domains as well. It is really like politics, and perhaps this debate made me sick of it, to the point that I actually moved away from research area that is considered linguistics proper, and instead moved into psycholinguistics, the interface area of linguistics that branches into cognitive psychology. I guess deep inside, I always felt uncomfortable with the way linguists gather their data, using primarily native speaker intuition, and I wanted something more quantitative, more rigid, hence, I went over to lab-based linguistics, running experiments and measuring offline and online measures. So now, my data is not whether a sentence has a star or not (an asterisk appearing before an example sentence in linguistics typically means this sentence is ungrammatical) based on native-speaker judgment, but instead my data consists of reading time, reaction time, eye-gaze proportion, among others.

After lunch, I attended the workshop on narration. I was interested in this because my work deals with discourse processing, and so I am concerned with how humans process large units of language, such as discourse and narration. Most, if not all, of the talks were not from a psycholinguistic perspective, but that was okay. After all, my idea was that I might see a cool idea, and I could go ahead and test it in the lab. That's how research works, after all. I just have to keep restraining myself from moaning as most of the talks were too much humanities. Again, this is my quirk against type of data, and yes, I do have a bias against the humanities. I approach language from an experimental and scientific point of view, generating hypotheses and conducting experiments to see whether there is evidence to support these hypotheses or not. But hey, there is a big world, there's space for everybody.

I guess one talk specifically remained in my mind. It was the talk that tried to extend Discourse Representation Theory into fiction. So yes, this was a formal semantics talk, who claimed that in order to model fiction, one should take a cognitive perspective. Now, the idea in my head was, wasn't this already done by discourse psychologists decades ago? Philip Johnson-Laird is famous for the mental model theory, and other folks extended that, such as Zwaan and Radvansky's Event-Indexing Model. The main idea is that language comprehension is pretty much whether us language users successfully recreate a mental model of the narrative that is being described by language or not, whether this is fiction or otherwise. And this mental model we have can monitor many things, including who the protagonists are, where they are located, what events they are engaged in, and what times are associated with these events. This whole branch of research was done within discourse psychology, and yet I suppose since the formal semanticists have not been talking with the discourse psychologists, they never knew about it, and only now are generating these ideas that they should extend their modeling attempts into the cognitive realm.

Anyway, overall I enjoyed my first day. I caught up with a few people: I met a former faculty member in Buffalo who is now based in Germany; I met my adviser and we had quite a long chat; and I even got invited to give a talk to a colloquium! The invitation is verbal for now, but the formal invitation will follow soon I suppose. So yeah, it's been a good start, and we'll see what the rest of the conference brings! 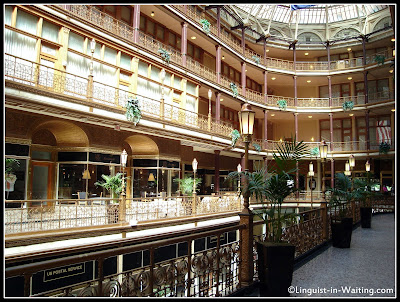