Religion and the Restaurant Ban

This is a rant, not a travelogue. Just so you know.

Anyway, my friend and I decided to do a daytrip to Szczecin. Readers might remember that I have already done this daytrip back in November, and posted photos of it. Anyway, since my good friend from Buffalo was visiting me for a bit, and she wanted to increase her country count, she suggested we go to Szczecin during Easter Sunday.

Anyway, we departed rather early, caught the 8:05 train from Berlin-Gesundbrunnen station, and arrived in Szczecin-Glowny station in 9:48 AM. We printed a walking tour beforehand, and simply followed it.

However, soon enough, we realized that everything was closed. While following the walking tour, every establishment we saw was closed. The only thing we saw that was open was a McDonald's, which had a sign saying that they would be open from 11:00 onwards. Obviously, that became a concern, as we only had a quick breakfast at a bakery near the train station in Berlin.

Anyway, to cut a long story short, we just decided to speed up the walking tour, and catch the 12:24 train back to Berlin. We arrived in Berlin around 2:45 PM, and went to a restaurant and had a late lunch.

What I do not understand is that this whole deadness in the city is caused by Easter. I suppose people in Szczecin are way more religious than people in Berlin. Yes, there are closed establishments in Berlin during the holidays, like supermarkets and department stores, but museums are open, restaurants are open, and bakeries are open. You don't need to stack up on all of our living supplies before the holidays in order to survive.

I guess what I find bizarre is that a city with a population of 400,000 will just close like that. It's not like we're in rural countryside. I also find bizarre that everyone just shuts things down in the name of imposed religious observance, assuming that everyone will have no problems following what is in essence a ban on spending money and doing business. I don't get it. Don't get me wrong, I love holidays, as it gives workers off-time, but one would think that people don't go take their off-times all simultaneously, and that some believers can take it off, while non-believers don't have to.

Of course, this is just a rant, and the biggest casualty being our hunger, which is indeed a first-world problem, but I just find it annoying when religion is the root of a problem like this. 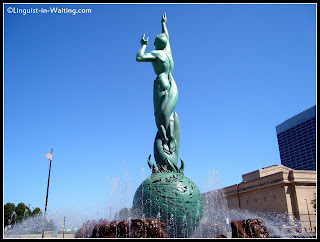 (Statue and Fountain, from my Downtown Cleveland Series)