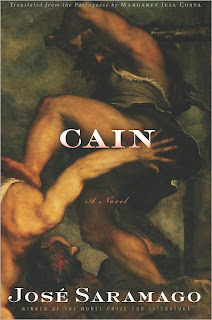 Cain: the first murderer, the first person who committed fratricide, what do we know about him? In this novel published shortly before he died, José Saramago continues his long-standing argument with God, through the eyes of Cain. It has been a while since I read a Saramago novel (the last time was a year ago, with The Gospel According to Jesus Christ), so it is once again refreshing to encounter the long paragraphs, and his very unique writing style.

Anyway, a short synopsis first. This book tells the Biblical story, from the beginning, so to speak, through the eyes of Cain. After killing his brother, he was condemned to wander forever. He witnesses plenty of things, including the building of Noah's ark, the tower of Babel, the golden calf incident with Moses. And in typical Saramago fashion, he writes in a way that somehow fills in the holes of the Bible (or the Book of Nonsense according to Saramago, as is stated in the Prologue). For example, Cain is the one who rescues Isaac from being sacrificed by Abraham when God's angel arrives late because of a wing malfunction.

Perhaps that's about the synopsis I will write. After all, most readers are probably aware of the Biblical account. The thing is, what I like most about this book is that Saramago takes the Biblical account and pokes all these holes at its arguments, showing how absurd it is to believe in such a God, which, if you will actually take a look at its actions, is a very cruel and unjust God. Saramago takes all the non sequiturs in the Bible and in typical Saramago fashion, using reductio ad absurdium, shows how believing in the Bible even after these flaws is such a stupid idea.

Take the concept of the original sin and the fruit of the tree of the knowledge of good and evil. According to the Bible, God gave Adam and Eve freedom to eat from every tree, except from that tree. And when they did, they were punished and banished from the garden. But, why would God want Adam and Eve to be ignorant and clueless about good and evil? As Saramago points out, "even the most rudimentary of intelligences would have no difficulty in grasping that being informed about something is always preferable to being ignorant, especially in such matters as good and evil". Saramago additionally points out that this setup shows God's lack of foresight, because if God really didn't want Adam and Eve to eat from the tree, then he could have surrounded it with barbed wire or put it in a very hidden part of the garden.

Saramago makes a huge argument against God's infallibility here. He takes many Biblical events to illustrate how ludicrous this idea is. For example, when Cain killed Abel, Cain is punished. But Cain actually talks back to God, and says that God also shares responsibility for Abel's death, because if God is all-powerful and all-knowing, then as much as Cain can kill Abel, God can also prevent Abel's death. The question is, why did God not prevent that?

Some people might argue that God gave humans free will. Therefore humans can choose to be good or bad. And if they choose to be bad, then God will punish them. That part I do not get. That is not free will at all. God obviously has one outcome that he is rooting for, that humans should be good. And if they are not good, well, just look at what he did with the people from Sodom, or the people around Noah's time. While I do agree that doing good and bad things have their outcomes and consequences, God's punishment is not one of those consequences. God cannot have his cake and eat it too. You either give free will to humans and just let them go, or take free will from them and make them robots in order for them to be your humble servants, what you've always wanted.

The book has plenty of other incidents illustrating the nonsensical notion of God. It illustrates how this idea of God is very cruel, taking for example Abraham being forced to sacrifice his son, or Job being forced to be God and Satan's experiment. The common theme among all these Biblical stories is a morbid Godly fear, and Saramago, within just 150 pages, just a great job at showing how farcical this whole religion business is. The thing is, this Christian notion of a God requires robots, humans who are pre-programmed to just obey this God's every whim, without questioning it. If that is what we humans are supposed to do, then we don't need a very complex brain the way we have it. In other words, our biology does not match with the religious expectations of what good God-fearing humans should be.

Anyway, it might sound like this book was preaching to the choir when I read it, but still, I find it refreshing. I identify as an atheist, and while I am sure of the reasons of my beliefs (or lack of it), it is still great to see additional reasons confirming why I left religion in the first place. It has been 5 years since I did so, and I can still confidently say that it was the best decision I have done in my life, so far. And I am glad that the human race has produced awesome cultural heritage like José Saramago, who champion the idea of free, rational, and critical thought. People should after all think for themselves, instead of simply buying into a package deal of thought and behavior such as religion. Humans can have morality without religion. We can determine what is good or bad without consulting a book like the Bible. After all, the Bible is full of non sequiturs anyway, so how can you be sure that that is indeed the manual humans need in order to live morally?

Needless to say, I am giving this 5 stars. Do not read this book if you want to remain in the dark. 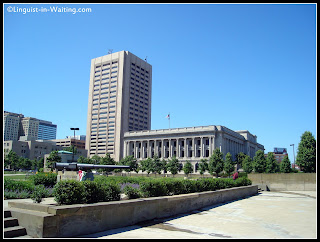