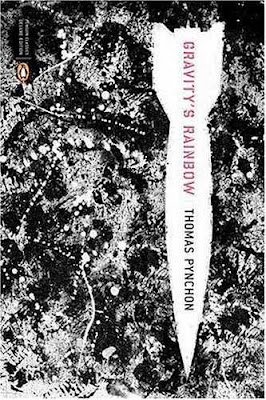 I suppose I didn't listen to the warning. The book's back cover said that this will be a difficult read. It said that one can say the novel is set in 1944, and there is a main character by the name of Tyrone Slothrop, but that's about all they can tell. It further describes the act of reading this novel as falling down a rabbit hole into an absurd and mysterious world, and I can definitely say that it sure felt that way. I was told to forget my earlier notions of life and letters and even the novel. I took a month to read this, and upon emerging from it at the very end, I am still confused, thinking what it was I actually read, and trying to find answers.

See, I am not even going to attempt to write a synopsis. The synopsis is too complicated. And when I read the Wikipedia article for this novel, I wonder how in the world were they able to distill the synopsis written in the article from this dense book?

Here is what I know. There is the main character, Tyrone Slothrop. It seems that some sort of psychological conditioning was done on him when he was an infant. Now he is an adult, there are rockets that fall from the sky, and it seems that it falls on the places where he had sex before. Cause and effect also seem to be in reverse in this novel's world. The rocket first falls, and then you hear it approaching afterward. The subject matter that this novel covers is dense and broad, from statistics to coprophilia. If you want to experience something different, then I suggest trying to read this book.

I read that this book was immediately recognized as a work of literature. But I wonder, how? How can one wade into the very dense prose and recognize that this is art? I suppose this blog entry is less a book review and more a philosophical monologue about how to recognize art in fiction. I have to admit, I cannot confidently say that I understood the book. And people have already told me that Pynchon is very dense and it takes several re-readings for the book to finally click. But a part of me cannot help but wonder whether this is a literary case of the Emperor's new clothes. You know, is it a work of art because so many people just cannot understand it? Am I having difficulty comprehending this piece as a work of art because I am not educated enough, because I am a novice, and because I am not a real critic? Or is it labeled as "art" simply because too many people cannot understand it and so labeling it as art saves one's face? Believe me, I tried, but I cannot say that I have been wow'ed by this novel the way I was amazed when I read V. 3 years ago.

The thing is, I wished Gravity's Rainbow stopped at around half of its page count. My edition had 902 pages. I wished it stopped at around 450. There used to be a plot, but as I progressed into this rabbit hole, it disappeared. So, instead of a plot, what I was confronted with was just a series of vignettes, some of them connected with each other, others were not. And somehow, all of them were still related to the elusive V-2 rocket and Black Device that constantly appears throughout the book.

One consoling factor though, is the fact that I speak German and live in Berlin. Plenty of references to Berlin have been made, at the same time, there are plenty of passages in German, which definitely helped. As a reader who spent the last month constantly reaching out my hands out into the dark trying to grasp onto something to serve as a point of reference, these little things helped.

So, should I recommend this? I don't know. Probably not. I guess I'd tell others to read this only if you are up for a real challenge. I have been told numerous times that one must re-read Pynchon's prose over and over again in order to fully understand his novels. That may be the case, but I won't. I am giving him 2 out of 5 stars. Given his track record in my book, it is probable going to be a long time before I pick up another Pynchon novel. I might have loved V. but I didn't like this one, nor Inherent Vice.

I know that there are a lot of Pynchon lovers out there, and that Gravity's Rainbow is his most discussed novel. A quick search in the Internet reveals plenty of sites trying to explain to you what this work is all about. That might be great, and reading those notes might help in understanding this work. But that is not what I want from a novel. Novels for me are a form of escape, a parallel world that I can enter and exit when I have nothing better to do, like during my commute. Novels aren't supposed to be an obsession, and I shouldn't be required to read a ton of other material in order to access a novel. Post-modernism is great, but if it becomes a dense, overwritten tome consisting of 900 pages of logorrhea, then the greatness stops right there. Gravity's Rainbow was 4 stars for me until page 300; for every additional 300 pages after that mark, I subtracted a star, for a final rating of 2 out of 5.