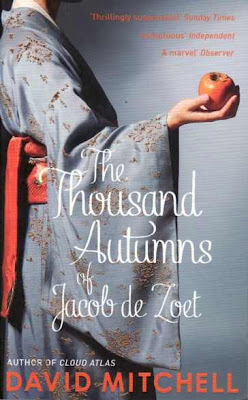 It's been a while since I have read a historical novel set in the Orient. And so when I was browsing the bookstore the other day, I saw this book, and given the fact that I loved Cloud Atlas, I decided to go ahead and read this one.

This novel is set in Nagasaki, between the 1790s to the 1810s. A young Dutch clerk, Jacob de Zoet goes to Japan as part of the Dutch trading company that was the sole company allowed by the Japanese government to trade with them. He falls in love with a Japanese midwife. Unfortunately, there are plenty of other factors that interfere, including social and personal ones, that this love is hard to pursue.

Given that the first time I read David Mitchell was Cloud Atlas, and given the fact that I totally loved that book to the point that I was willing to give it 6 out of 5 stars, I had high expectations for this book. However, there were times in which I thought it wasn't how I expected it to be. Don't get me wrong, overall, I liked the book, but as I was progressing, sometimes I thought I wished I didn't read Cloud Atlas beforehand so that I wouldn't generate this huge expectation on David Mitchell's writing style.

That being said, there were plenty of things I liked about this novel. First, this novel dispenses away with the traditional view of the Far East. For example, it was quite refreshing to read a book that deals with historical Japan, and yet doesn't talk about "exotic" Japanese sexual practices. Other books I read which were set on medieval Japan (James Clavell's Shogun and Gai-Jin come to mind, for example) puts a large emphasis on the differences in sexual practices between the Japanese and the Europeans, for example. I just don't get why one needs to make a big deal of these "exotic" Oriental sexual practices, as in my opinion, this trend just fetishizes Asian people, something that I personally do not like. Hence, I liked it when this book didn't do that.

Another thing I liked about this book is that it expected the reader to be intelligent. See, David Mitchell doesn't spoon-feed the reader with the narrative. There would be times when the chapter ends describing an event, but Mitchell doesn't describe the event in its completion. Instead, he lets the audience fill in the holes. So the reader thinks whether something happened or not, and reading the next chapter will either confirm or disconfirm this. I know that this is a page-turning strategy as well, but at the same time, I think it shows that Mitchell has trust in his audience, expecting them to be intelligent enough to fill in the gaps. I like that. After all, I would like to think my brain is intelligent enough to do that, and if the author just gives everything to me, then somehow that would feel like a little condescending.

So overall, I think I liked this book. Not as much as Cloud Atlas, after all, that book is just on a whole different level, but I still like this book more than my average book. I am giving it 4 out of 5 stars.