On my second day in Barcelona, I decided I'd head out early. I wanted to go to Sagrada Família, which is they say, the one thing you shouldn't miss in Barcelona. I mean, if you'll only see one thing while in the city, then this should be it. Okay, so I went out, after eating breakfast in the hostel, I decided to go ahead and walk right in time for opening. I was staying in l'Eixample, so the Sagrada Família was just a short walk.

However, when I arrived, there were already people lined up to enter. In fact, the line was quite long, it bent around the corner, and so patiently I found the end of the line and started waiting. Fortunately, I had my book with me, so I just fished it out of my bag and started reading while the line was slowly moving forward.

It was a little cloudy, and sometimes even drizzling, so when I got to the ticket booth, the lady told me that the towers were closed that day. What a pity. But that's okay, the interior and ground level had plenty of eye candy for me and my camera anyway. So I bought my ticket, went in, packed my book, and as a replacement, fished out my camera. And wow, I wasn't prepared for what was inside. 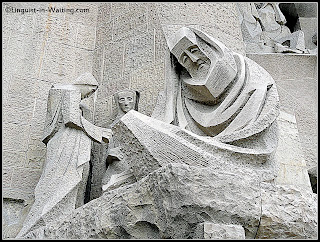 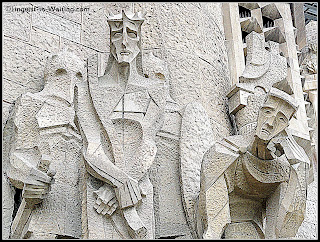 Entrance (aside from the group ticket holders) are from the Passion Facade. There are three facades, and two are already completed. This one has more of a cubist feel to it, though I have to say, I didn't stay long enough to admire it as there were plenty of people behind me who wanted to get in as soon as they can. So I just went in. 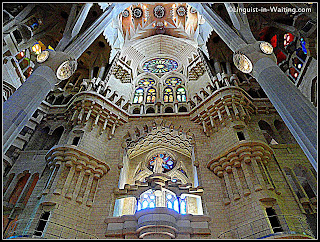 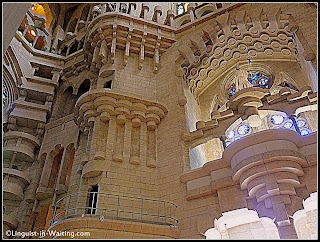 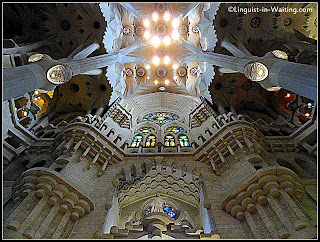 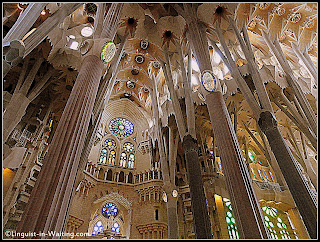 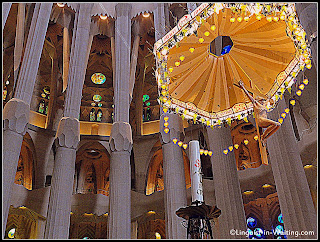 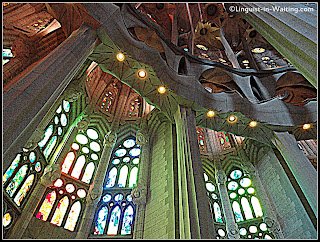 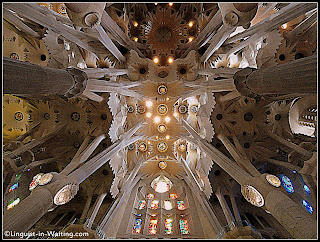 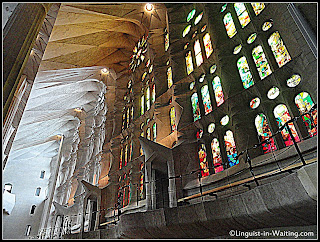 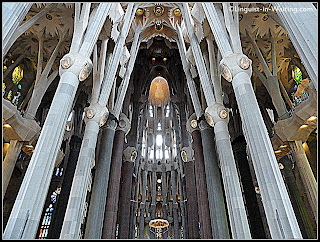 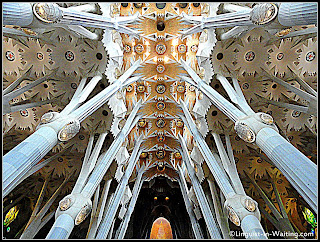 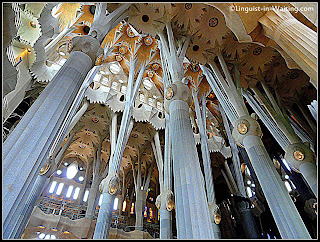 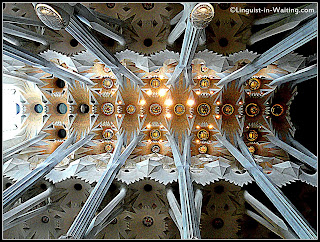 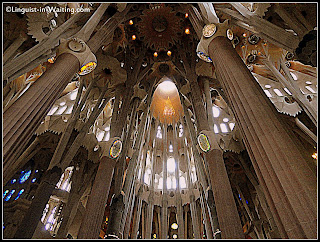 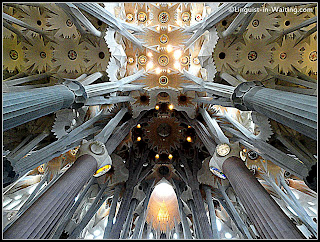 Where am I? Am I in a church? In a concrete forest? In a cavern? The interior of this building is just magnificent. The columns are just mind-blowing, and something else, something I haven't seen before. I knew that Gaudi was a genius, but I never really comprehended the full strength of his genius until I've seen the interior of the Sagrada Família. I loved how the light enters the building from the rooftop, and reflects through all the stained glass and tiles positioned inside the church. As much as I am not a religious person, I could definitely see how a building like this would move one to awe.

I spent more than an hour inside this building. I strained looking up, as the more interesting thing is always above my head. Eventually, my neck hurt, and so I decided to go out, and check the other completed facade, the Nativity Facade. 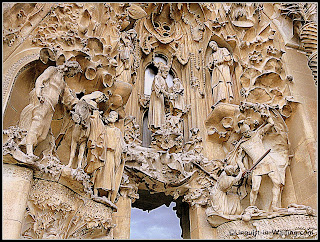 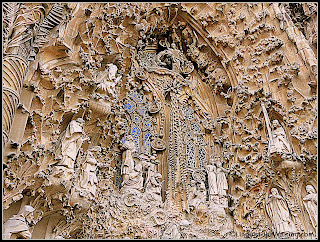 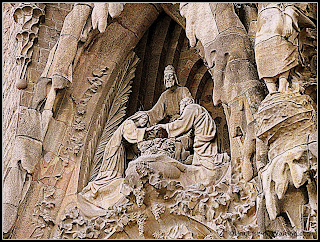 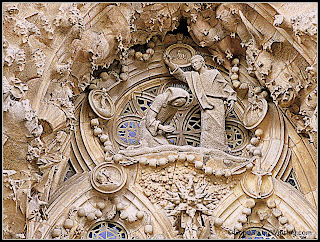 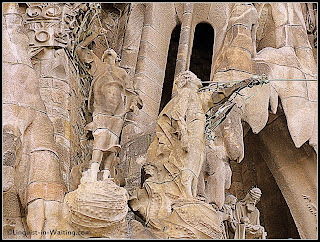 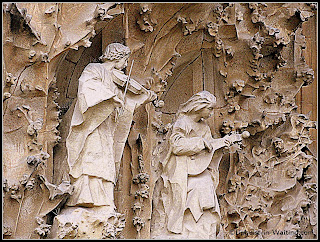 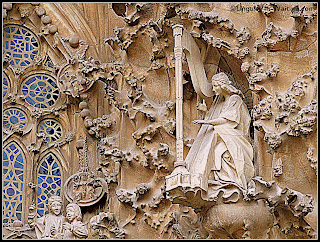 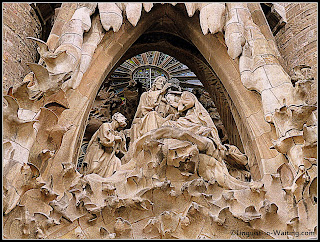 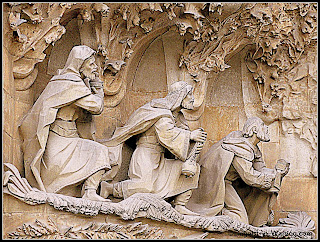 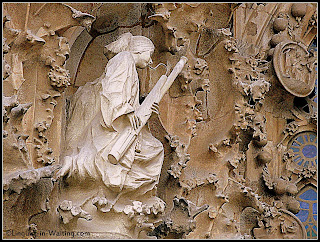 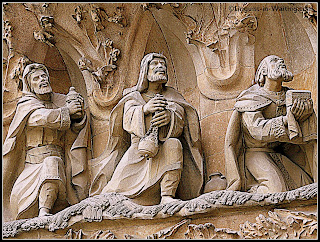 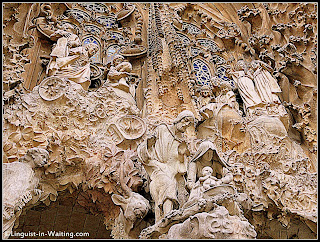 Wow, there's plenty of things going on here. The design is very intricate, and there are plenty of scenes that are being depicted. Yes, there's the birth of Jesus, and there are also angels, musicians, shepherds, everything according to the legends. This is facing the Group Ticket entrance, and unlike the other facade, there's plenty of room to admire things. Hence, I used my camera a lot, and checked out the intricate designs in this area of the church.

After visiting the Sagrada Família, I realized that architecture is a very powerful thing. It can move people, certainly. I actually had a brief thought while I was in there that I wouldn't mind attending religious services if this were the building in which it were being held. However, a few seconds later, I realized that would still not be possible, as being religious is more than just attending services and admiring the building in which these services are held. More often than not, being religious means that one believes in one particular version of events, one particular theory, and takes this theory as true, and dismissing everything else as false. No matter how beautiful the Sagrada Família might be, if that's still the message that comes out of the podium, then I don't think I can still stomach it.