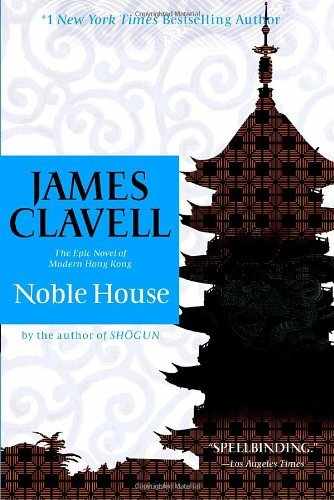 For one week in 1963, heavy rains pour in Hong Kong. At the same time, there are landslides, bank runs, kidnappings, espionage, and other high-profile incidents that happen in and around the British colony. And caught in the middle of these are the CEOs of foreign companies based in this island. For one week, this book narrates the events surrounding the daily life of two rival CEOs, when the CEO of a third company based in the USA arrives looking for a partnership with either one of them. The narrative is thick and has several plots, but mostly, it centers on Ian Dunross, the tai-pan of Noble House, and the visit of Casey Tcholok and Linc Bartlett, joint heads of Par-Con.

This is the fifth book in James Clavell's Asian Saga. Every year, from 4 years ago, I have read one book from this series, starting with Shogun in 2009, Tai-Pan in 2010, Gai-Jin in 2011, and King Rat last year. I am glad that I have been reading them in chronological order (as opposed to publication order), as there are characters in later books that were previously introduced in earlier books, and so one just has the necessary background for these characters when one encounters them. For example, Riko Anjin is said to be descended from the main character of Shogun; the Noble House and its family directly descended from Dirk Struan who was the main character in Tai-Pan, and Peter Marlowe reappears from King Rat.

Unlike the other books, however, the overall narrative time in this book is short. All the narrative just takes place within a week. In fact, the chapters are time-stamped, so it's almost like the action is happening in real time. That being said, it still manages to pack a lot of twists and turns. After all, take one random slice of a week's worth of happenings in a city and there are still plenty of things one can talk about.

I am not going to write a synopsis for this book; it is too long to do so. Basically, there is one company, the Noble House, and its CEO, Ian Dunross. There is a rival company, headed by Quillan Gornt. A US-based company is thinking of partnering with either Dunross or Gornt. There are under-the-table transactions, plus there are events that are related to the Cold War (such as espionage between the West and the Eastern Bloc) that somehow entangle these characters. So overall, it is not just a business thriller, but an espionage thriller as well. I suppose one can fully enjoy this novel if one thinks that this is a novel about Hong Kong as a venue for high-profile business transactions and espionage.

The thing is, I find myself not liking this book. I have looked at my previous reviews for the other books in the series. And it seems that though I like historical fiction, it has to be rather dated for me to like it. Sure, Hong Kong in 1963 is a perfectly valid setting for a historical novel. However, it doesn't read like historical fiction. Instead, it just reads like an airport novel, and a very thick one at that. Looking further, I guess I liked the books which were set earlier than the 20th century. Hence, starting from King Rat, I didn't like it as much as I liked the previous ones. Noble House is not an exception. It didn't feel like literature, in the sense that I felt like I read 1370 pages of text just because I needed to read something, and not because it is a wonderful piece of text.

See, I guess my biggest problem is that I find it hard to sympathize with the characters. This might be a story about Hong Kong in 1963, but there are more types of people in Hong Kong than the ones sampled here. If the social fabric of this book was a representative of Hong Kong, then one can conclude that Hong Kong only has very high-profile people leading banks and companies earning 7-figure salaries and talking about money in the thousands, as well as cruel and nasty and rude and poor Chinese people. Is there no middle-class? The difference between rich European and poor Asian is still very much highlighted. Who knows, I guess that was true back then, and still is, for all I know, but I guess it just reinforces the stereotype.

And what is this obsession with sex again? The novel is already set in 1963, so I thought the whole business about Asian sex exotica that I complained about in the earlier novels would be eliminated, but no. Clavell still talks about the Rain and the Clouds (his euphemism for orgasm), and there is still plenty of talk about pillowing, and the encounters of the yin and the yang. I wonder why, did he think his book won't sell unless he puts some sex in there? Don't get me wrong, I don't mind sex scenes in a novel, but the way he describes them are just too exotified in my opinion.

Sometimes I wonder why I picked up this book. Then I remember that I am the person who doesn't give up on a series; yes, if the book is bad, I still will read it until the end, hoping it would turn better. At least I gave the book a chance. The same thing with the series. I once had this goal of reading the whole Asian Saga, and now I am one book away from finishing it. Given the trend, I probably will not like the final book, but I am still witholding judgment on that.

For Noble House, however, I am only giving it 2 out of 5 stars. I find it hard to think of this novel as having value more than just entertainment for a very long flight.