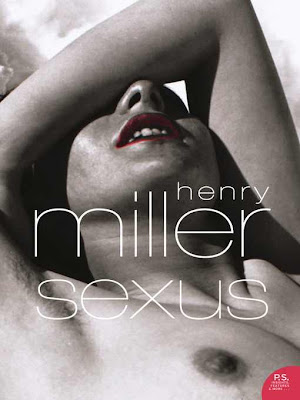 When I was 18, I convinced my parents to buy me a copy of Henry Miller's Tropic of Cancer. Given my family's conservative background, that only succeeded because the edition I found in the bookstore was part of a publishing company's "Classics" series. However, that book was definitely not like the other classical works I have been reading so far. In short, it opened my eyes.

Ten years later, in 2010, I picked up Tropic of Capricorn. Needless to say, I was amazed yet again, and glad that I picked up that book. Henry Miller seemed to be this amazing writer willing to clash with current norms of morality and book-writing. So this time, I picked up Sexus, which is the first of the three books that make up his Rosy Crucifixion Trilogy.

Published in 1949, this novel tells a fictionalized account of Henry Miller's life from the time he meets Mara (modeled after his real-life wife June), who later changes her name into Mona, which then puts Henry's marriage with Maude on the rocks. Set in Brooklyn, this book puts heavy emphasis on Miller's sex drive, while talking about his philosophical takes on happiness and work ethics. This all in all takes about 460 pages, where Miller talks about his attitudes toward work and emotions, while narrating very graphic sexual episodes. The fact that this was written in 1949 is a big deal, after all, this work was banned in several countries due to its very graphic and explicit sexual content.

The thing is, that is what makes this book attractive to me. The fact that it is avant-garde, ahead of its time, the fact that Henry Miller had the guts to write about his sexual exploits; these all gave way to the freedom of speech that we living in the 21st century enjoy. Just imagine that this book was banned back then, back when society still thought that it was okay to dictate one's sense of morality on to others. Imagine if you are still living in that sort of world, when society actually can dictate what you can and cannot say, because someone has the power to dictate what is moral and what is not.

In my opinion, that is a very dreadful world to live in. That is a world where it is assumed that people cannot think for themselves, where it is assumed that people need some sort of external force to decide what is good and bad for them. However, we humans have a brain that is complex enough to know what is good and what is bad for us. Nobody should be telling us what we can and cannot write about. Some people think that there would be anarchy if there is no external force, but so far, that hypothesis hasn't been observed. Live and let live so far works. The only times when it doesn't work is when there are people who think they can dictate on to others what can and cannot be done.

Anyway, I digressed. I laud Henry Miller for actually being an avant-garde when it comes to freedom of speech. To those prudent moralists out there; do not pick this book to read. You are under no obligation to do so. If graphic narratives of sex make your stomach squeamish, then by no means should you read this book. There are very graphic descriptions of sexual intercourse here, mostly heterosexual, between Henry and his several female partners, but there are a couple of threesome scenes between Henry and two women. There are graphic descriptions of body parts oozing bodily discharges. If you think that descriptions of perfectly natural human activities are not appropriate reading material, then stay as far away as you can from this book.

See, I find it so illogical that some societies would have very adverse reactions to sex, while embracing novels and movies that have very graphic depictions of violence. I wonder which one is more natural, to have sex, or to kill another human?

Anyway, if you don't have your butt seated on a high moral pedestal, then by all means, pick up this book. It is mind-blowing, and it's all very much worth it. I rate this book 5 out of 5 stars.