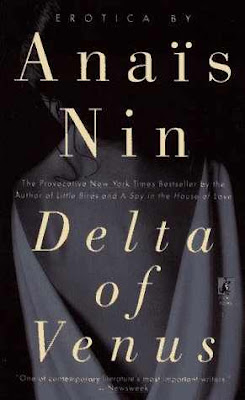 Finally, I have picked up this book. I have already heard of this collection of short stories, but I just had no chance to read it before. As I am a fan of Henry Miller, I figured it would also be a good idea to read a book written by Anaïs Nin; a long-term close companion of Miller.

The collection of short stories here span humanity's various sexual preferences: from the typical male-female relationship, to homosexual pairings (both gay and lesbian), to voyeurism as well as bestiality. It even features a story that involves a transgender. Some stories are just 10 pages long, some are more substantial.

I am not providing a synopsis here; let's just say that each short story gave me an erection at one point. However, as much as these stories are sexually explicit, the collection is composed of erotica, not pornography. These short stories are not stories that you would read just so that you can reach orgasm. Instead, these short stories reveal the full extent of the spectrum of human sexuality. I like the fact that even though this was written in the mid-20th century, Nin already is bold and daring in including sexual encounters that are not so conservative and traditional.

One thing that I noticed, though, and is something that I do not know how to interpret, is that Nin seems to be averse to using the word "vagina". In fact, the word "vagina" only appears three times in the collection. This is in sharp contrast to the word "penis" which appears almost once per page. For "vagina", Nin only refers to it as "her sex", which, even though she uses that to refer to the male sexual organ as well, the frequency is very much skewed. I do not know why this is the case, but I cannot help but think that Nin is still holding back when it comes to vivid descriptions of human sexual activity.

Anyway, I am glad that I finally got the chance to read this book. It is a book that everyone should read at one point. Sex is not supposed to be taboo; everyone does it, so what's the point of pretending that what is happening behind closed doors is not happening? I applaud Nin for actually writing this, and being perhaps one of the first writers to be extremely frank about it. I rate this book 4 out of 5 stars.