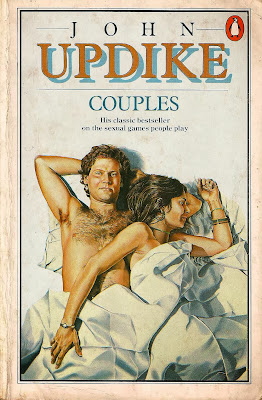 So finally, I picked up a John Updike book. But perhaps this was not the ideal first book of his to be read. As it turns out, Couples is a very complex book and at times, I had this internal monologue with myself arguing against Updike, resulting from the scenes he described. It is a very disturbing book, at least given my views on love, sex, and relationships.

Anyway, first, a synopsis. Couples is about the lives of 10 married couples in the fictional town of Tarbox, Massachusetts. It is set in 1962-63, and features a lot of historical occurrences in American culture: Kennedy's dead baby, Kennedy's assassination, among others. The 10 married couples form one big circle, and yes, they are sexually promiscuous, and partner-swapping happens. The novel doesn't have a definitive "start", rather, couples enter and exit: some couples enter by virtue of having a new job in the area, and some couples exit because they get cancer and die. The novel has a definitive ending, however, when one of the men gets caught with his hand in the honeypot, so to speak, as this affair seems to be more complicated than others, resulting in several separations and divorces. A grand sexual domino effect, basically.

The way I see it, Couples exemplifies the series of events that surrounds the sexual revolution. The birth control pill is introduced, and in many respects, released the woman from reproductive bondage. For the first time, they can freely have sex for the pure enjoyment of it, not because they want to procreate. The pill is of course, featured heavily in the novel, as this is the method most of the wives use in order for the affairs to remain product-less. I see this novel as illustrating the scenario that would result when a sexually liberating device such as the birth control pill clashes with conservative (in this case, Protestant) ethics and mores. And sometimes, the clash can be earth-shattering and have wide-reaching effects.

Speaking of ethics, this is where I get internal monologues. See, I do not get why these people are still sticking to their Protestant mores (or at least, trying to) while at the same time, blatantly violating them by conducting affairs with their neighbor's wives. The thing is, I have no problem with the concept of infidelity. Relationships can be open or closed, it is up to the people involved in the relationship. Sexual intercourse, after all, is just one of several aspects in a relationship. Sexual information is one of several different types of information that can be shared among couples. And couples can opt to be closed and exclusive with each other when it comes to sharing sexual information, or open, in which they can opt to share sexual information with other entities. The important thing is that there are other types of information that would still bind them to each other, and therefore the relationship still holds. That is at least my view.

So I don't understand why these couples cannot sleep with each other and not get along. Perhaps it is because unlike me, these couples cannot disentangle sex and emotions. I can have sex without feeling anything but sexual desire for my partner for that encounter. That is called a hook-up. And it seems that not a lot of people can do that. It seems that sex associates other types of emotions targeted for the other person, even though for all intents and purposes, people have sex only because they want to get off.

And since the couples here cannot have sex without feeling more than sexual desire, they end up in this mess of love affairs. Hence, people get separated, and the town just ends in a mess. I suppose this is the reason why I do not even entertain the thought of having sex with people I am friends with or know very well, unless I am in a relationship with this person. Most of the time, I find that the relationship I have with a friend is more important, and therefore I don't want to ruin it by sharing sexual information as well, as I don't assume that this person shares the same beliefs I have with respect to sex.

Anyway, back to Couples, the reason why these couples in the end collapsed and didn't get along is because they couldn't have a strict divide between simple sexual enjoyment and a relationship. The affairs they conducted didn't happen simply because they wanted a diversion, but because they eventually ended up loving the other person, more than the person they were married with. Add to that the fact that these couples also were debating whether they can have their cake and eat it too: whether they can continue on conducting their affairs and still be ethical or moral. We all know my views on ethics based on religion, so I see this book as portraying a generation that I am happy not to be a part of.

Overall, I liked the book. However, there were some aspects which I found hard to understand. There were 10 couples all in all, and I wished there was a way to keep track of them, a chart or something. The couples come and go in the narratives; so the main character of one passage differs from the next passage. The narrative structure is flatter than usual; there isn't an obvious conflict and resolution, or rather, it is longer than the typical one. The conflict of course is this whole issue of people sleeping with other people's partners. And it just happens that even though there are several instances of affairs being conducted among these couples, one of them stood out, and that resulted in the collapse of the whole social circle.

So, I am giving this book 3 out of 5 stars. I liked it, I would recommend it to someone interested in the sexual revolution, but I don't think this is a good introduction to the works of John Updike. I myself am not sure whether I would pick up another Updike book or not. If I do, then it would definitely take a while before I do so.