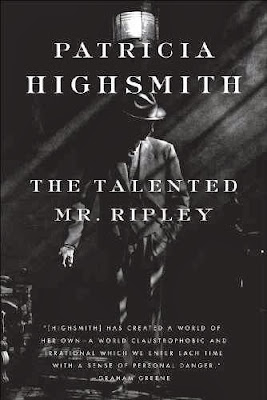 I have seen the movie several years ago, and I remember liking it. So I finally decided to pick it up, and sure enough, I have this idea that I liked the book more than the movie.

And sure enough, I liked it. I loved Tom Ripley. I loved this book because Tom Ripley is such an interesting character and the author has given a very detailed character description, not only of his appearance, but also of his mental state.

Just for the sake of a synopsis, The Talented Mr. Ripley is about an unemployed con artist, Tom Ripley, who gets a chance to travel to Europe for free, sponsored by Mr. Greenleaf, who is the father of Dickie Greenleaf. Dickie is an American living in Italy, who wants to be a painter, and yet his father wants him to come home to take over the family business. The father hires Tom Ripley to persuade his son to come home, thinking that the two young men are good friends and therefore Tom Ripley can use his influence to change his son's mind.

Obviously, this didn't happen, and Tom Ripley just becomes envious of Dickie's good fortunes, to the point that he kills Dickie Greenleaf and takes over his identity. The rest of the book is then a cat-and-mouse game between Tom Ripley and the Italian police as they try to solve the puzzle of the missing man, among other things.

I won't tell the whole story here (there is another person who gets killed), but oh my, Patricia Highsmith has done a great job writing this novel that it allows the readers full access to the mind of Tom Ripley, as he conjures up several possible scenarios on how the Italian police will act, and therefore how he is planning his next moves.

Yes, sometimes, I found myself cheering Tom Ripley, hoping that he wouldn't get caught, because I just want the story to continue. This, in spite of the fact that he is actually a "bad guy", an anti-hero.

Perhaps the thing that fascinates me with the character of Tom Ripley is how his own personality seems to be a blank slate. The book more than suggests that he has no personality of his own; instead, he just is like a chameleon, and blends in with the surroundings, and he perfectly mimics the personalities of the other people around him, to a very creepy degree. He is indeed, quite talented, in that respect. I loved how he just transitions between accents and mannerisms, as he takes on the various quirks and eccentricities of every other character that he comes across. In this respect, it reminds me of another anti-hero, Jean-Baptiste Grenouille of Patrick Süskind's Perfume. Both anti-heroes are portrayed as people who have no identifying marks of their own: in Tom Ripley's case, he has no personality. In the case of Jean-Baptiste Grenouille, he has no smell of his own. And I love how both books portray these two characters as almost lifeless unless they do something bad. In other words, Tom Ripley has to kill in order to find a personality and identity to inhabit, while Jean-Baptiste Grenouille has to kill in order to collect a smell and make a perfume of his own.

Another aspect I want to talk about pertains to the fact that while Tom Ripley is a murderer, I didn't find it hard to like him. This is in stark contrast to Humbert Humbert, the anti-hero of Vladimir Nabokov's Lolita. I cannot figure out exactly why, but I find it harder to like child molesters over murderers. I guess there is something molesting children that doesn't tick well with me, more than killing another person. I know, both books portrayed their anti-heroes in a way that they are rational in doing these deeds, that they need to kill or they need to molest a child, as if it is their nature to do so, but still, I cannot stomach Humbert Humbert, and overall I didn't have a very favorable opinion of that book. On the other hand, I loved The Talented Mr. Ripley, and you can be sure that I will pick up the next in the series sooner than later.

Overall, I loved this book. It was a great psychological exercise as it has given me access to the mind of one criminal, who happens to have a very fascinating way of thinking. I give this book 5 out of 5 stars.