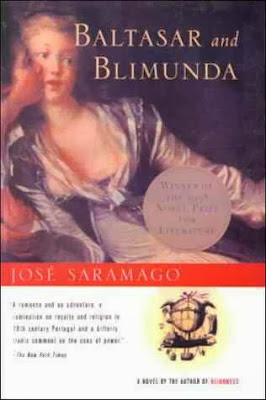 A one-armed man, a woman with superhuman powers, and a priest who wants to build a flying machine, all living in the 17th century in the Kingdom of Portugal. This was the setting of this novel by José Saramago, written in 1982. Perhaps due to the fact that this is actually the earliest of Saramago's novels which I have read, I don't find myself liking this book as much as I have liked his later works. I will talk about why this is the case later; first, a short synopsis.

Baltasar is a soldier, returning to Portugal, after a war. Due to the war, he loses his left arm, and as he returns to Portugal, he meets Blimunda, a girl who can see inside people, as long as she has been fasting. They bump into a priest who is trying to invent an airship, but because the Inquisition is under way, as well as very conservative religious sensibilities, the airship construction project is done in secrecy, or else people would accuse them of heresy and they would be burned at the stake.

For quite some time, Baltasar and Blimunda become the priest's helpers in building the airship, and in the process, fall in love with each other. Soon though, the Inquisition catches up on them, and they use the now-built airship to escape. People see a flying object and attribute it to the Holy Spirit. Some years pass, however, and the priest finally dies, and Baltasar and Blimunda are the only ones left in the story. The story then turns into the construction of the Convent of Mafra, which is more or less a very tragic event. Baltasar finds work even though he only has one arm, but one day, he doesn't return, and Blimunda spends the next decade trying to find him, until she finds him about to be burned at the stake, presumably, for being a heretic.

As I said earlier, this is not the atheist Saramago that I loved. Sure, he has several passages that hint at his strong views later on, but perhaps because this is one of his earlier novels, that wasn't too strong yet. It is indeed apparent, but not as blunt as his later works. For that, I was a little disappointed, but at the same time, I also acknowledge the role of history here. Every exemplary writer needs to write not-so-exemplary works in order to reach excellence. And I only am critiquing it based on my own personal preferences. In other words, Baltasar and Blimunda might not be my most favorite work of his, but I can see why this book needs to be written.

Moving on to more positive aspects, I like the fact that Saramago was able to weave fiction and non-fiction in this book. Bartolomeu de Gusmão was apparently a real historical figure who pioneered the design of the airship, while Domenico Scarlatti was a well-known composer who apparently gave service to the Portuguese royalty. I never knew of Bartolomeu de Gusmão, while I didn't know that Domenico Scarlatti spent time in Portugal. In this respect, I loved the fact that I got to know more about these historical figures, and I am also amazed at the ease in which these historical figures entered and exited the narrative world that this book presented to the reader.

Overall, this is definitely a Saramago book, but probably not the first book I would recommend to anyone who would like to start reading his works. The narrative thread is meandering, and at times, were a little too much in digressive episodes. I was expecting this to be a book that centers on Baltasar and Blimunda as the central characters, but sometimes, it digresses too much on the building of the convent in Mafra. Though perhaps this is the fault of the translation of the title, as the original Portuguese title is Memorial do Convento, which makes it seem like the central or focal point of the novel is not these pair of humans, but the convent in Mafra which is being built. Anyway, to make it short, I just would like to say that I at times felt lost while reading this book. Or maybe it was the fault of the translator, as I am definitely more used to the translations of Margaret Jull Costa, and the edition I read was not translated by her. Oh well. Anyway, I still enjoyed this book, though not as much as the other novels I have read by Saramago. I give it 3 out of 5 stars.