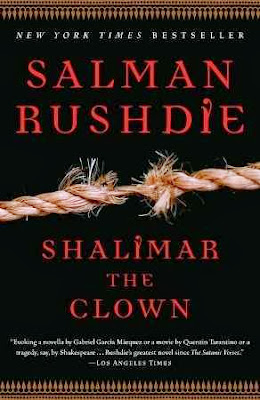 An American former ambassador to India is murdered in plain daylight, and the murderer is from Kashmir, who trained in militant camps. Is it a politically-motivated killing? Or is it a personal one? From the moment I started this book, I couldn't put it down. It is the story of a love affair that went very very bad, involving a murdered man, his killer, his daughter, and the woman who connects all characters together.

As this is not the first Rushdie book I have read, I was already expecting several things from this book. I was hoping that it would be written in Rushdie's style combining frame narrative and magical realism, and sure enough it was. True to form, Rushdie only focuses on four main characters, giving each of them their own story. At first, it felt like there were four novels inside this book, and they were all only connected superficially. But at a later point, everything clicks, and all of the pieces of the puzzle fits together, and the reader is rewarded of a beautifully interwoven complex picture.

As a synopsis, this novel is about the killing of Maximilian Ophuls, former US ambassador to India. While in India, he meets a Kashmiri dancer, Boonyi. Boonyi happens to be married to a local man, who goes by the moniker Shalimar the Clown. Boonyi leaves Shalimar for the ambassador, but unfortunately, a child is born. This resulted in the affair being terminated, and the ambassador returns to the United States, with his estranged wife taking the child with her, as she is childless herself, yet wants a child. She uses the child for leverage against the now-disgraced ambassador. This child grows up. In the meantime, the mother returns to her village, disgraced herself. And Shalimar has been plotting revenge, on all parties involved, to avenge his honor.

The beauty of this book is that the story is already given to the reader upfront. However, what the reader gains from reading the novel is not the full plot, but the intricately-described back-stories and backgrounds. Each of the five sections focus on a character, and provides the full story bringing the reader up to date. The novel begins in medias res, so to speak: the murder happens within the first few pages. It then rewinds to the past, providing each character's background, so that three-quarters into the novel, the reader now knows why the murder happened, and what the motive was.

Aside from the fact that this novel narrates a murder, this is not a murder story at all. The reader already knows who killed who. The big question, however, is not about the contents of the story, but on the mechanics of the story. For me, reading this book was suspenseful, not because I wanted to know what happened next, but rather, because I wanted to know how every piece tied up together. It just happens that the pieces were talking about a murder.

This book is not your typical light reading like an airport novel. But it is a page-turner, as long as you appreciate Salman Rushdie's style. I have read three books of his before this one, and I should say that every time I pick up a book of his, I am extremely satisfied with the experience.

I would give this book 5 out of 5 stars. Salman Rushdie's works aren't the easiest to read, but this one is more accessible than his other works.