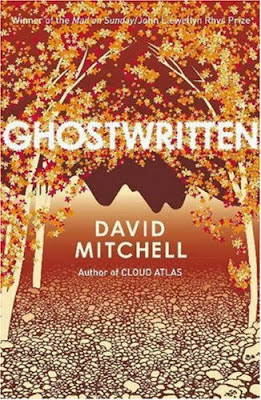 This is the third novel I have read from David Mitchell. And I should say that I am definitely impressed yet again. Hyperlink literature? I think it takes a genius of a brain to craft something very intricate and sophisticated as this piece.

As a quick synopsis, this novel is actually a novel with 9 storylines. The stories move around the world, and features multiple main characters, from a terrorist in Okinawa, to a physicist in Ireland, to an art thief in Russia. It even features a ghost in Mongolia. The action of the novel takes the reader across various cities around the world, and all of these characters are somehow linked altogether. Sometimes, because the ghosts inhabit the other characters, or other characters temporarily brush against other characters. And through all of these characters, Mitchell paints a picture of humanity, that is on the brink of destruction, and yet provides a glimmer of hope that everything will be alright.

The aspect I like the most about this book is its inter-connectivity. As I said earlier, hyperlink literature. I love how I am tempted to read and reread earlier chapters to see again how things connect. And I wish there was just this chart to see how all the characters are related to each other. The storylines sometimes are temporally non-linear, and so I wonder whether all of these are temporally possible, or whether there are miscalculations. I tend to think that there isn't, as the more Mitchell novels I read (this is my third one, as I got hooked after reading Cloud Atlas), the more I realize that he is a novelist who likes hyperlink literature. I mean, he has characters that appear in multiple novels. So I like the fact that I have already read Cloud Atlas because minor characters in Ghostwritten have bigger roles in that book. In essence, Mitchell is crafting his own universe, through his books.

To some degree, I like the fact that the main plot of this book is not in the individual stories per se, but the collective picture that is painted by these individual stories. Mitchell paints a picture that is perhaps most easily seen in the section entitled "Night Train", where a non-human entity points out that humans are destroying themselves. It's not a pretty picture, and I am afraid that to some degree it is true. But I also like the fact that as much as Mitchell might be a realist, he is also an idealist. He paints a way out. And yes, even though humanity might be destroying the earth (or the "zoo" as Mitchell analogizes it), there is still a possible solution to all of this. I think that is the main message of the book.

Overall, I loved this book. It was part science-fiction, and part philosophical. I wonder why most science-fiction literature have this metaphysical aspect to things, but the genre sure lends itself easily to such topics. I definitely recommend this book to others. I give it 5 out of 5 stars.