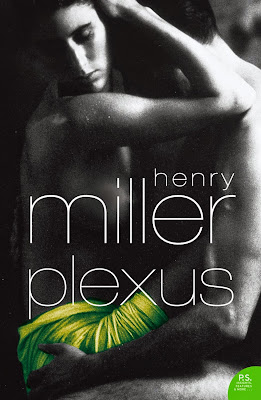 Last year, I picked up Henry Miller's Sexus, which was the first book in the Rosy Crucifixion trilogy. Having read Tropic of Cancer and Tropic of Capricorn before, I wanted to pick up this book and continue reading the trilogy. Alas, it seems that Miller's style has started to fizzle, and unfortunately, I cannot say that I am enthusiastic about this book the way I was with the previous books I have read.

See, the previous books (both the two Tropics as well as Sexus) was highly charged with sex. Sure, it was sexist, it was misogynistic, it was sex-driven. Miller would write about his fictionalized life, in between very graphic descriptions of sex. And that was amazing. That was transgressive fiction. However, the sex disappeared here in Plexus. And that somehow made the whole book rather lukewarm. Instead of reading transgressive prose, all I have is 460 pages of a man talking about his life, as he tries to be a pathetic writer, without earning any money, as he goes up and down the streets of New York City. In short, it feels like it's just one big rant of a man who has a big ego and a lazy attitude.

Don't get me wrong. I don't need sex in fiction. But to be honest, it seems to me that what saved Miller's previous works were the sex. He was willing to break free from people's Victorian inhibitions and graphically talk about topics that are considered taboo by society. However, here, that went away. Instead, it feels just like a diary, and unfortunately, I don't agree with Miller's work ethic and find him an arrogant and lazy bastard, so to speak. I mean, sure, it is nice to aspire being an artist, but sometimes, one's art cannot feed oneself. His hesitation and reluctance to work, as well as his antics on how to avoid work and instead bum meals and money from others just pissed me off. I really felt like I should have no pity to people who are not willing to put effort to contribute to society.

Overall, I was just disappointed that this book was simply about a lazy man's diary of his days in New York City. Gone were the sex episodes, gone were the passages challenging society's morality. Instead, these are just passages challenging people's work ethic, and unfortunately, I disagree with his take on things. Before one can act like a self-important bastard, one must first prove that one's art is worth one's self-importance. Otherwise, others would just see oneself as someone who has a very big ego that needs to be deflated.

3 stars for the deflated experience.