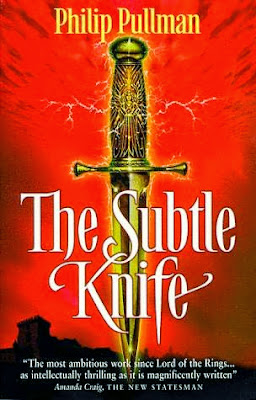 The main character of the book is not only Lyra, who was already introduced in the first book, but also Will, a human from our universe, who is about the same age as Lyra, and has a missing father. The topic of Dust has been fully expanded here, and it seems that the problems in each universe have correlates with problems in other universes. So for instance, what is Dust in Lyra's universe is Dark Matter in Will's (and our) universe. And perhaps, the issue of dissent is slowly being fleshed out here.

Indeed, I remember that when I read the first book, I had this feeling that the book only subtly hinted at atheism and religious dissent. I read my old review of the first book and said that its anti-religious overtones were very weak. But this time, it was different. I can definitely see this book as something that is anti-religion. Not necessarily anti-Catholic per se, but anti-dogma, so to speak. As the book says, there are two different types of forces in the world, one that wants everyone of us to be humble and submit to authority no matter what, and another who wants us to be rational and question everything that is given us.

See, I honestly don't see why questioning authority is seen as a bad thing. After all, we have brains, and using our brains means actually logically and rationally thinking about things, instead of simply following orders. That's what I felt when I was still a part of organized religion. I felt that we were only expected to obey, and we were not allowed to question things that were handed down to us. There was a group of men formulating the doctrine in Brooklyn, and they wrote it in magazines, and all the members needed to do was to internalize the doctrine written by these people. No questions asked.

Obviously, there is a side of this debate that I prefer. And I definitely hope that this side is the one that will win in the book. We'll see, unfortunately I cannot be sure of that until I read the last book in the trilogy.

I have to say that even though this is a fantasy book, and there are plenty of travel involved, I am not annoyed by it. My main complaint about fantasy books is that they seem to always involve travel in the plot. Yes, this book does involve that, but somehow I feel that the bigger issue overtakes the importance of it, and therefore I wouldn't mind if the characters move here and there every now and then. As much as they do travel in the book, there still is the bigger picture of consent versus dissent.

Overall, I like this book. I actually like it better than the first book in the trilogy. So I am giving this 5 out of 5 stars. I recommend this to everyone. However, I think that in order to fully understand this, one must read the first book first.