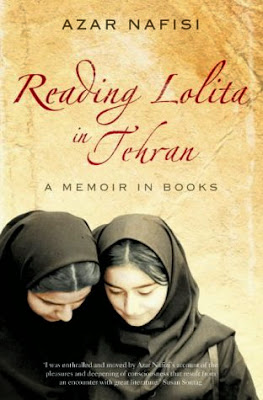 I rarely read non-fiction, and when I do, it seems that I read books that fuel my desire against totalitarian and repressive efforts. I just scanned the last three non-fiction books that I have read, and they were Joseph Anton: A Memoir, by Salman Rushdie, about his experiences of living under police protection simply because he wrote a book and it happens that an entire regime thinks it is blasphemous; The God Delusion by Richard Dawkins, arguing against the irrationality of the whole concept of religion; and Infidel by Ayaan Hirsi Ali, writing about her experiences as she was threatened by Islamic fundamentalists. This time, I opted to read Reading Lolita in Tehran by Azar Nafisi, writing about her experiences under the rule of the Islamic Republic of Iran, as the regime tried to tighten their grip against women and liberal thought.

I have to say, this is a very powerful book, and it made me reminisce and think a lot, from the very trivial to the very complex. At some point, I thought that this book is powerful enough that it made me reconsider future plans of traveling to Iran in order to see its beautiful scenery. But I'll talk about that later, first the book.

This memoir is divided into four sections, each centering around either a book or an author. And in every section, Nafisi delicately relates her and her students' experiences to parallel concepts in the book or author in question. The four sections are Lolita, Gatsby, James, and Austen. I don't intend to write a synopsis of the sections here; a quick Internet search can give you that. Rather, I think I'd like to write down the thoughts that occurred to me while I was reading this book.

First, it occurred to me how I consider the ability to hold a dissenting opinion to be very important. And I despise it when there are regimes that restrict people from having a dissenting opinion. The Islamic Republic of Iran is like that, at least based on this book. This is also tied to my issue with religion. The whole essence of religion is antithetical to the concept of dissent. Religion just wants you to believe, and have faith, and forget about voicing a contradictory point of view. If you happen to have a contradictory point of view, then you will be branded as an apostate. Oh I remember various instances in the past, when I was growing up, of efforts by the Jehovah's Witnesses (I was raised as one) and their believers to restrict dissent. So whether it is religion, religion-based politics, Fascism, McCarthyism, or whatever other form of totalitarianism, I am against it. This in turn affects my views on (mass) surveillance, but that's for another blog entry.

Second, I find myself see-sawing back and forth between two views about Iran and the Iranian people. On the one hand, there is a large part of me that wants to travel there, and see for myself the beauty the country has to offer. I heard that people are very hospitable, and that travelers who have been there overall had a positive experience with their trip. On the other hand, there is a small yet growing part of me who think that the regime in Iran is not a regime I have congruent views with. Sure, you say that the regime is one thing, the ordinary citizens is another. But sometimes, I tend to think that what Joseph de Maistre is true, that every nation gets the government it deserves. There is a part of me who wonders that the reason the regime in Iran is like this is because the ordinary citizens allowed it.

Perhaps it was a lack of education. Perhaps people were more conservative and therefore when the Shah was removed from power in the Iranian Revolution of 1979, the people who grabbed power were the Islamists, the people who thought that every Western influence was anti-Islamic and decadent. That without thinking, they were willing to make a black-white judgment about morality, and they had no problem imposing it on to others, including half of their population, who were now ordered to wear the veil. There is a part of me that if ordinary citizens really did not like the idea of a morality police, then they would not allow it in the first place. It thus logically follows that the actions of the regime are in some levels, a reflection of the citizens, and if that is the case, then I don't know whether I still would like to visit Iran or not.

I don't know. I probably still have a thirst for travel that is hard to quench. But perhaps after reading this book, Iran falls down a few notches from my travel wish list. I know that things are more complex and are not simply black and white. Hence this book is definitely food for thought. I definitely recommend this book to read: it has strengthened my views against totalitarianism, and has given me more appreciation on my current situation, that I am living in a place that allows me to have conflicting views. I give this book a rating of 5 out of 5 stars.