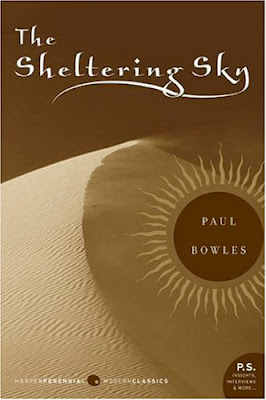 Ah, how refreshing. This book is perhaps one of the best books I have read recently. I am so glad to have picked it up.

Anyway, it tells the story of Porter and Katherine Moresby. They are an American couple, from New York, and they opted to travel to the Sahara after the Second World War. They aren't the most enthusiastic when it comes to the destination, and they only picked Tangier as a starting point because that is one of the few places they could go by ship from New York. They hate their surroundings, and sad to say, they also hate each other. After ten years of being married, they are now sexually estranged from each other. And this trip is messing up with their heads.

See, no character in the book is easy to like. In fact, I would go as far as saying that all of the characters are villains, so to speak. Everyone has a flaw, and the author makes a very good job of portraying them as annoying and disturbing people. I like the whole colonial mindset of the book: the travelers are portrayed as the premiere example of the traveler I hate, those people who think that they are better than everyone else, complaining that the "natives" are more primitive, that the "French" are annoying, and so forth, always thinking that they are superior. It makes me want to tell these people that if you really think the others are worse than you, then why did you even decide to travel in the first place? Just stay in your suburb in Baltimore, for crying out loud!

I find the characters here very pretentious (they consider themselves travelers, not tourists, with the distinction that the tourists hurry back up to their homes after a short while, while travelers stay on and move forward, yet in my opinion, they are the perfect tourists, being so closed-minded and refusing to integrate and even understand the local customs and traditions, always making a divide between them and the natives. Everyone in this book makes a divide between them and the natives, whether it is the main characters, or the ones in the periphery.

Anyway, surprisingly though, instead of being annoyed, I actually was amused. There was no character I could sympathize with, so instead, what resulted was that I viewed the surroundings with more admiration on its beauty instead. The characters were ugly, so their surroundings became pretty. The harsh desert, the incomprehensible locals, the foreign food, the wind blowing around sand, all of that, all of that carried on for me a smell of exotic intrigue, that was just highlighted because the characters were not to my liking. But I wonder, perhaps that was the original intention of the author himself?

This novel is branded as a novel about existential despair. And yes, as we go deeper into the novel, the characters' personalities disappear, and they simply get carried away by the external forces surrounding them. In my opinion, this is a well-written book showing extreme contrasts between internal and external forces, and things that are typically focused on are not, and vice versa. The writing style is seductive, and it was a book that I simply couldn't put down. I definitely give this 5 out of 5 stars. Totally recommended.