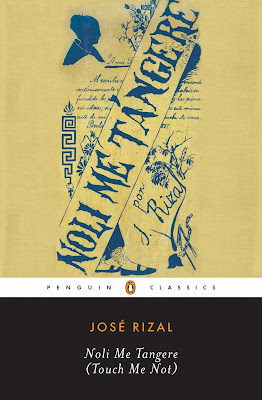 Every Filipino is required to read this book. After all, the author is the Philippine national hero, and therefore if you go through the Philippine school system, one way or another you will take a class that deals with Jose Rizal. In high school, this book is required reading. And the constitution also dictates that every university student has to take a 3-credit class on Jose Rizal, of which this book is also required reading. I happen to have finished high school outside the Philippines, and therefore I wasn't able to read this book. I cheated and read a Cliff Notes version of this book in preparation for my university class, but it turned out that my professor was an activist and therefore opted to teach us more about communism than about Jose Rizal. So only when I was in New York City and visiting a massive bookstore did I see this book, translated in English, which is the version I have read.

See, this book is supposed to be the book that motivated the Filipinos to rebel against Spain and declare independence. In fact, after this book was published (in Berlin, nonetheless), Jose Rizal became a target of the Spanish government, and therefore he was branded as a subversive, and he was imprisoned. And so I was curious what this book was about.

There are several main characters here, most prominently Crisostomo Ibarra, a half-Spanish half-Filipino young man, educated in Europe and returned to the Philippines as an idealist. He is engaged to Maria Clara, daughter of Captain Tiago. They live in a town called San Diego. In this town (and the country, as a whole), the ordinary citizens are at a disadvantage, against the ruling Spanish elite, but mostly against the Catholic Church, which is definitely displayed in a bad light. They are opportunistic and punish the local citizens. On top of that, people are so immature and superficial, and most day to day transactions and relationships are done because they care about what other people think. In other words, it's a society that I definitely deplore and don't want to be in.

I am not going to provide a synopsis here, all I can say is that the story is very tragic, and that it is a story of the elite fleecing and torturing the citizens. People are presumed guilty until proven innocent. Hearsay can suffice as evidence, and torture is widespread. When people are poor and without powerful connections, then they are more often than not victims.

The funny thing is that this book is supposed to be the book that motivated the Philippines to rebel against Spain. But after reading it, I think the Filipinos got their target wrong. After reading this book, I would have been motivated to rebel against the Church (except at this point, I already did that even before reading it). I don't understand why this book should somehow show the reader that the colonial government in the Philippines is bad, when it is actually the religious practices that are enslaving the people. It is the practice of buying indulgence, of buying a mass to absolve oneself of sins, it is these beliefs of hellfire and purgatory, these beliefs that shackle people into thinking that religion is the most important thing in their lives. These are the prisons that people are captured in, and unfortunately, I have to say that this is true even now.

I guess I would suggest that every Filipino should read this again, and really think and ponder who the enemy is. Because it is not colonial Spain, but rather, the Catholic Church who tries hard to keep the citizens in the dark, imprisoning their minds with their religious bullshit.

I definitely give this book 4 out of 5 stars. It is good reading material, but I have to say, Rizal isn't the best writer out there. After all, this book is not a novel for a novel's sake, but a revolutionary message disguised as a novel.