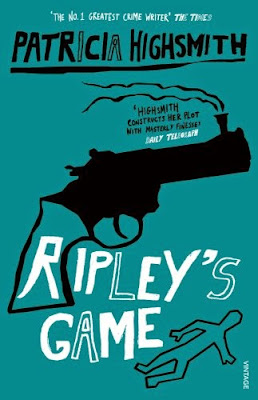 Tom Ripley's adventures continue, for the third time around. I first started reading the Ripliad series back in 2013, reading The Talented Mr. Ripley, followed by Ripley Under Ground last year. In both cases, I loved the books, mostly because of the fact that Tom Ripley is this Machiavellian anti-hero, who kills people but in a very logical and rational manner. Readers typically find it hard to sympathize with anti-heroes, understandably so, but I find myself doing the opposite.

In the third book, Ripley is approached by the criminal Reeves, who needed someone for a job. Namely, a hired assassin. Ripley has an idea to implicate an Englishman named Jonathan Trevanny, who insulted him recently. As retribution, Ripley spreads the rumor that Trevanny is dying, after all, he has leukemia. By spreading the rumor that Trevanny is dying soon, then Trevanny would be more likely to agree to kill someone for a hefty price. Unsurprisingly, he does. So he goes and follows directions and kills a Mafia member in Hamburg. However, obviously, there are things that don't go into plan, and Ripley gets involved as well.

I won't write a full synopsis here; I'd leave that to Wikipedia. However, I still find myself drawn to Ripley, as he seems to be the perfect anti-hero. He is rational, and believes that killing should only be done if it is indeed necessary. I love his lines of reasoning, which is explicitly described in various passages.

Perhaps what I like more about this series of books is that I feel like this is more than just a psychological thriller. Rather, the author also addresses issues about morality and ethics. Is killing absolutely wrong? Or is it acceptable if you are killing someone who is a criminal, such as a member of the Italian mafia? What if your murder victim has killed several other people himself? Aren't you just ridding the world of one criminal if you proceed with the murder of this individual? How about money, would you go ahead and use money that you know is payment for killing someone? Or would you rather remain poor and impoverished? I believe that Highsmith makes readers think about these issues, which in my opinion is worth thinking and pondering over every now and then.

The thing is, the world is full of hypocrites. There are people who think they are morally correct, ethically in the right, and they want to dictate to others how their lives should be lived. There are people who want to dictate that their religion is correct and therefore social rules should be mended to reflect their religious rules. Just take the issue of same-sex marriage. Why can't people just let other people live their lives the way they want to? In my view, humans are inherently selfish, and one way or another, they will crack. Just look at the news article revealing the live of the supposedly holy priests, and you'd see that their lifestyle isn't as holy as they claim it to be. Seriously, I'd rather be Ripley, who doesn't deny that he has done shady things in the past, than these supposedly righteous people who come a dime a dozen.

Overall, this was a good book. It might not have a lot of literary significance like other books, but nevertheless, this is a book that will give its readers suspense, as well as an occasion for moral introspection. 5 out of 5 stars.