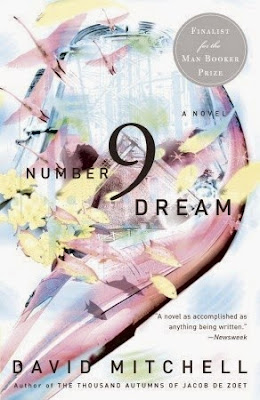 What would you do if the thing you really want in life turned out to be not what you expected? What would you do then? This topic is just one of the issues tackled in this novel, the second novel by David Mitchell.

See, the interesting thing is that I have read three books of David Mitchell already. I was captivated by Cloud Atlas (by the way, I read the book first, and then watched the movie). Then I picked up The Thousand Autumns of Jacob de Zoet, which was a little different in my opinion. After that, I picked up Ghostwritten, which was his first novel. Ghostwritten actually had plenty of similarities with respect to structure with Cloud Atlas, and I feel like number9dream also feels the same way.

The thing is, number9dream is a coming of age story, about a 20-year-old boy named Eiji Miyake, from southern Japan. He has an alcoholic mother who was never there, and an unknown father. He goes to Tokyo in search of his father, and gets into adventures and misadventures along the way. Now the interesting thing is that while this book centers on the main character, and uses the main character as a pivot to move the story forward, there are plenty of other things that are happening, which makes it feel so similar to the other two books of Mitchell that I have read.

First, there is the feeling that this book is actually 8 books in one. Yes, there are 9 chapters, but the last chapter is empty. The first 8 chapters all involve sequences of the story in Eiji's journey to find his father. He eventually finds his father, but his father turns out to be the total opposite of what he was expecting. And so his values shift. Yes, I have just given away the whole conclusion of the book, but in my opinion, what is more important here, and what is actually more enjoyable here, is to experience the ever-changing shape-shifting character of this book.

This aspect of the book reminds me of the inter-connected narratives of Ghostwritten, as well as the inter-embedded nature of the stories in Cloud Atlas. The narrative in number9dream jumps back and forth from dream sequences to fiction to reality to imagination. At some point, I thought that this book was a science-fiction story set many centuries ahead of us, only because it opened that way. But apparently it was only in the main character's imagination. In fact, sometimes, it is hard to see and figure out which one is reality and which one is imagination here. But I guess that is the charm of the book.

There were times in which I thought the flavor or the genre of the book changed every time I turn a page. But then again that shows David Mitchell's talent. It's as if he is multiple authors with one name. The sequence with the yakuza somewhat disturbed me, and I remember thinking that it felt a little bit over the top, but then again, you have to have over the top sequences to have more pensive ones too. The contrast is just what I think is fascinating here.

Overall this was a great book to read. If you enjoyed Cloud Atlas then I think you will enjoy this one. I give this book 5 out of 5 stars.