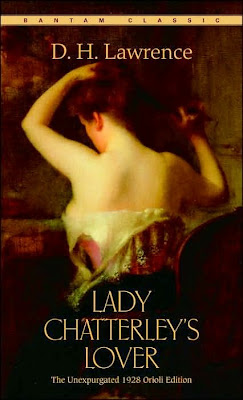 Lady Chatterley’s Lover: this is such a notorious and infamous book. And only recently have I had the chance to read it. And I should say that I definitely enjoyed reading it.

See, I have read several books of D. H. Lawrence before. I have read The Rainbow, as well as Women in Love. However, for some reason, I didn’t pick up Lady Chatterley’s Lover: I knew that the book was quite controversial, and I have definitely picked up books in the past due to their controversial nature (I have read all major works of Henry Miller, for example), but somehow I just didn’t get to this one. That changed recently, when I finally had the chance to pick it up, and so I read it within the span of less than a week.

Lady Chatterley’s Lover is a very complicated story that revolves around Lord Clifford Chatterley, Lady Constance Chatterley, and Oliver Millors. Lord Chatterley is a crippled war veteran, an aristocrat, married to Constance (Connie). Needless to say, their marriage is unhappy, and Connie doesn’t derive sexual pleasure from the union, due to Clifford’s paralysis from the waist down. Millors is the Chatterleys’ gamekeeper, with whom Connie starts having an affair. Millors of course is a commoner, but the difference in social class doesn’t prevent Connie from realizing that she is happier with Millors than with Clifford.

This novel has several dimensions worth noting. First of all, this novel is a novel about social class and traditions in England. Clifford is such an adamant bastard, thinking that every commoner is below him and has to be ruled by him. He has such a very negative attitude about all commoners, and his haughtiness shows throughout the book. He is too proud to accept help, even though he has a disability, and can only move about using a wheelchair. He is the archetypal conservative, who values tradition in many respects, whether it is about English society, or about the aristocracy. He worries a lot about how England has been changing, which he definitely does not approve of. He thinks that old England must be preserved, and change being brought by the Industrial Revolution ushering in the new England must be reduced as much as possible. Needless to say, he isn’t my most favorite character in the book.

Millors is the archetypal working class. His speech is differentiated by Lawrence in the sense that he uses the Derbyshire dialect for Millors’ dialogue. It is quite different from standard English, and at first, Connie has a problem with it, as she is puzzled with the fact that Millors would refuse to speak in standard English with her. But later on, she embraces this fact and accepts it.

Connie is perhaps the character whose politics I agree with the most. She refuses to be bound by tradition, and instead opts to follow her heart instead. When she realizes that her relationship with Clifford is emotionally dead, she doesn’t hesitate and ventures out somewhere else to find emotional fulfillment. And if this comes in the form of a commoner such as Millors, she is not hesitant and instead accepts it head-on.

Unfortunately, this book is a tragedy. All characters end up unhappy, and English society during the post-war period is still too stifling and constrained, where people live for others, instead of for themselves. It is such a pity that during those times, English society still had too many constraints, and people are more pre-occupied with thinking about scandals and social implications, rather than the pursuit of individual happiness.

I want to comment on the sexual explicitness of this book. Indeed, Lady Chatterley’s Lover has become infamous for the fact that it is such a sexually explicit book. There were words such as fuck and cunt which were until then never printed in a piece of literature. D. H. Lawrence in fact knew that he would be in trouble due to this book, and therefore opted to print it in Italy in 1928. He was right; this book was banned in the UK and the US until 1959. And it still is banned in other parts of the world.

I should say, however, that this book was not meant to titillate. Lawrence didn’t write Lady Chatterley’s Lover with pornographic intent. Indeed, if one would look at the passages in question, it was not meant to arouse sexual desire, but rather, it was simply meant to depict sexual feelings that were present in the characters, something that is totally normal and an integral aspect of human existence.

I guess it is unsurprising that most of the people who are against this book claiming that it is obscene and sexually explicit have not read the book. People who claim that this book is pornography most probably have not read the entirety of this book, and instead judge the book based on conservative traditions, something that ironically, is a topic that the book itself is speaking against.

Overall, I see this book as a well-written masterpiece. It’s a novel depicting the battle between conservatism and liberalism, between traditions and change. I am glad to have read this book, and definitely recommend it to others as well. I give this book 5 out of 5 stars.