Of course, I didn't go to Jerusalem without visiting the crown jewel of the city: the al-Haram ash-Sharif, or more commonly known as the Temple Mount. This is perhaps the most important religious site in the city, and unsurprisingly, it has been an important religious site for multiple religions. It has been used by four religious traditions, and it is the holiest site in Judaism, while it is the third holiest site for Islam. Needless to say, this is a place where plenty of tensions have taken place, and visiting this place isn't the easiest thing to do.

Visiting this place needs some planning. First of all, it is not open during all days. It is closed for foreigners on Fridays and Saturdays, because this is the Muslim weekend. And during the other days, they are open during the hours that do not coincide with Muslim prayer times. Exact times are posted at the only entrance that is used by foreigners, near the Western Wall. Other gates are off-limits to tourists.

Entering this place means you have to go through high security. Your bags will be scanned, and if the scanner shows something iffy, then they will open it. Better not go here if you have large luggage. Israelis are not allowed in the compound.

More importantly, prayer is not allowed in the compound. There are plenty of Israeli soldiers that are patrolling the area, and if they see anyone who is praying, even mumbling what looks like a prayer, then the person will be escorted outside of the complex. Of course, this is due to the fact that it is currently a Muslim site, while it is historically a Jewish site. Religious Jews actually do not want people entering this site, and therefore around the entrance you can see signs telling you what the local rabbi wants.

Anyway, legally it is okay to enter the site, aside from Muslim prayer hours, which is what I did when I was there. After clearing security, here is what I saw. 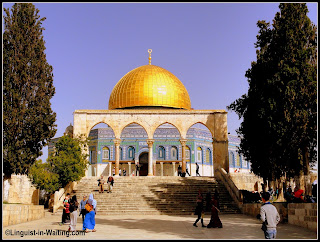 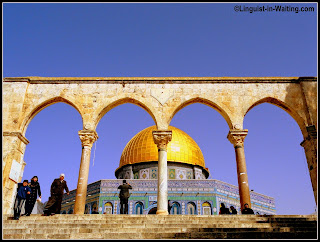 I have to say, it is one of the most beautiful buildings I have seen. It reminded me of the time when I saw the Acropolis for the very first time, this weird feeling of awe that you are now standing in front of a structure that is so famous and important, people wrote entries about them in encyclopedias. And now those pictures you saw before come to life in front of you. 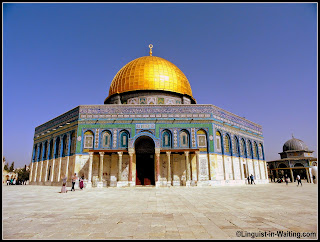 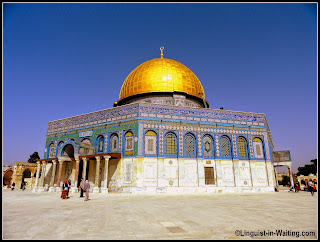 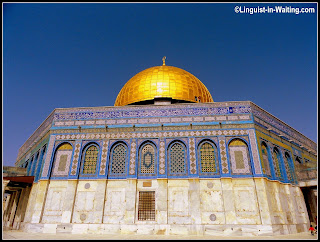 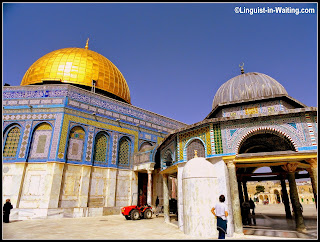 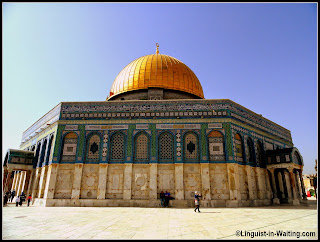 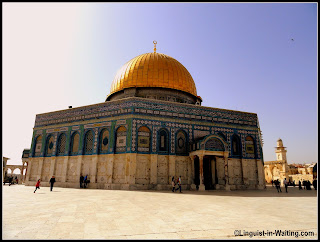 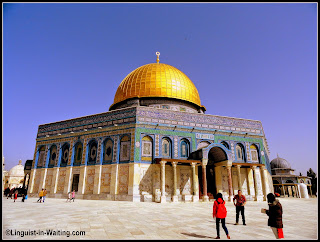 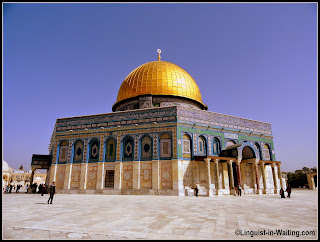 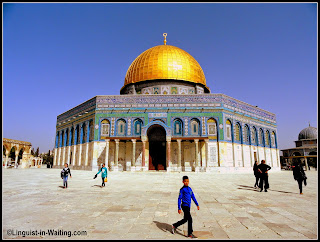 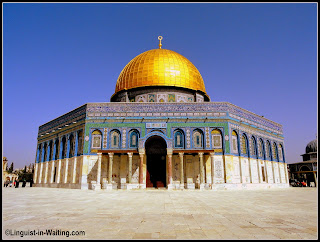 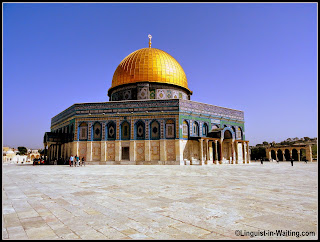 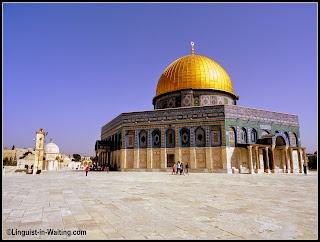 As I am not a Muslim, I was not able to enter this building. All I could do is go around it several times, admiring the golden dome shimmering against the bright sun. Regardless, I had this weird euphoric feeling, because I never imagined I'd be standing in front of the Dome of the Rock and admiring it up close. 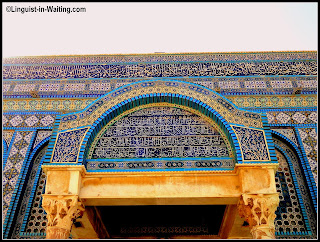 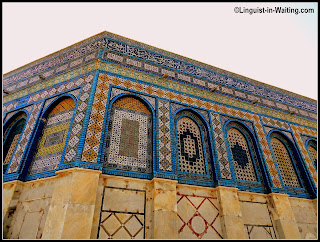 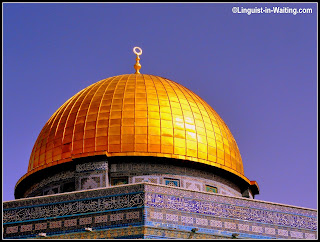 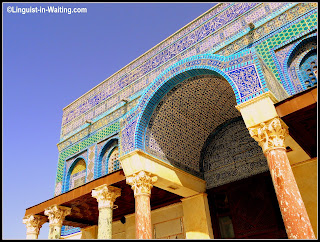 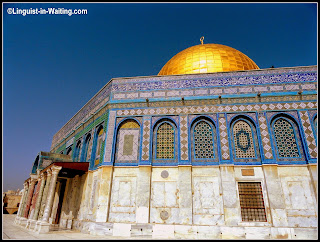 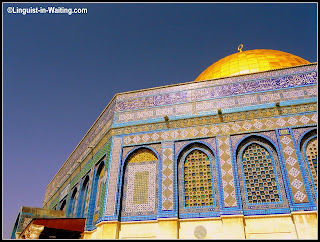 Check the details of this building! The calligraphy is just sensuous and flowing, it mesmerizes you when you look at it. The materials are so exquisite. That is expected; I have heard that the King of Jordan sold one of his London houses so that the dome can get a fresh coat of gold! 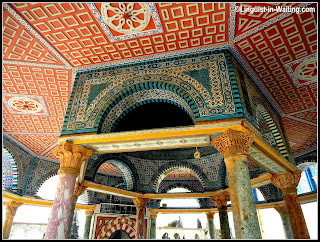 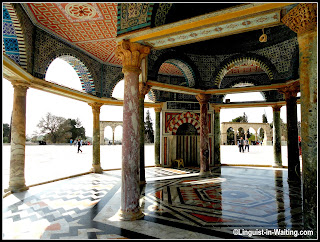 There are other smaller structures on the side, such as these round covered places. But even though these are just small structures, the design is again intricate. The attention to detail is turned up to 11. It definitely piques my interest for exploring more of the Islamic World. 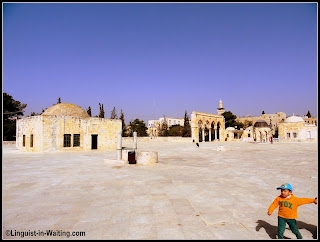 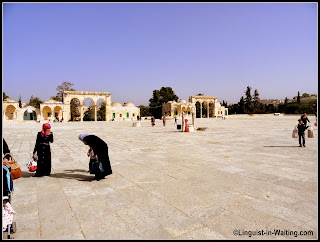 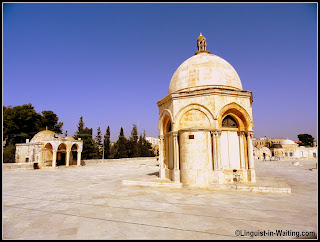 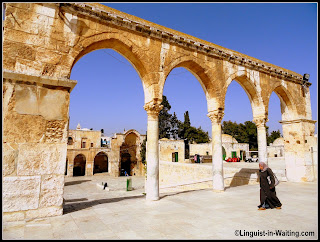 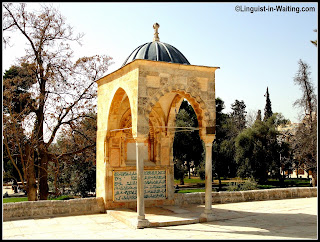 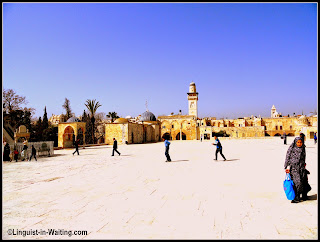 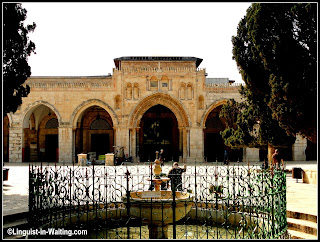 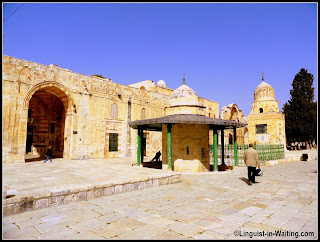 The final set of pictures I have above show you some views of other parts of the al-Haram ash-Sharif. One of the pictures also show the facade of the al-Aqsa Mosque, which is the third most important mosque in Islam. Most Muslims believe that this is "the farthest mosque" which is where Mohammed embarked towards his journey to heaven. So you can imagine how contentious this place is with respect to the world religions. One would think that this place has some basic fundamental role with respect to the Israeli-Palestinian conflict. But let's not talk about that for now, I've blogged about it enough. For the moment, let's just admire the architecture.