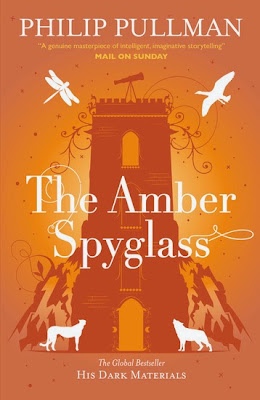 Wow, what a book! If you want to read a book that would shatter your primitive Christian beliefs about life after death, then this is it.

See, you have to read the first two books in the trilogy. You cannot understand this book if you haven't read Volume 1, entitled Northern Lights, and Volume 2, The Subtle Knife. Both books set the stage for this third and last book, tackling issues about life after death, as well as the original sin.

Once again, I won't attempt at writing a synopsis here. I will just mess it up. Rather, I would want to talk more about the issues that this book tackles, as well as its plot.

First, let me talk about the latter. This book has its narrative jumping between numerous worlds. Pullman uses the concept of the multiverse here, which builds upon the universes that were expanded in the first two books. In the first book, there was only one universe. In the second book, there were three. And in the third book, there were plenty. Once you get used to reading about jumping back and forth between universes, then the multiverse concept is easy to grasp.

I revisited my review of the second book, and noted that while travel was again a main component of the book, I wasn't annoyed by it, since one complaint I have about the fantasy genre is that travel seems to be always involved. Somehow, I find myself not liking that aspect in the third book. Travel definitely featured heavily again in this book, and I caught myself wondering silently why there has to be a lot of travel in fantasy. So maybe I was annoyed a little. I am not sure whether fantasy cannot exist without travel, and I do understand that the conflicts that occur in this book involve travel and battle, so perhaps it cannot be avoided, but still, I am waiting for someone to suggest a fantasy book that doesn't involve characters traveling a great deal.

Now let me talk about the anti-religion sentiment here. It definitely features a lot of it. In the first book, I thought that it wasn't anti-religion enough. This one definitely is anti-religion. It tackles two main doctrines of Christianity: a) what happens to us after death; and b) what is the original sin.

In this book, Lyra and Will (the two protagonists) decide to go to the world of the dead and free them. See, in all universes, people have been told that when they die, if they are good they go to heaven, and if they are bad then they go to hell. Heck, even when I was still religious, I was told that if I were good, I would be resurrected and live forever in Paradise. What a bunch of bullshit. In this book, what is being championed instead is the idea that when we die, we simply cease to exist. And that is the end of it. Sure, we live forever, in the sense that the atoms that make up our bodies rejoin the universe, and become atoms that are part of other beings and elements in the world. There is no such thing as heaven after death, nor hell. We don't need to live a life of suffering and penitence, just so that we can have a reward at the end of our life. After all, that reward doesn't exist.

Second, plenty of people believe that the Original Sin was committed by Eve, when she and Adam had sex. Here, the book champions the view that falling in love is actually a good thing. Again, this goes contrary to the whole celibate nature of Catholicism. It makes me wonder sometimes why these religions emphasize a stoic and spartan view of faithfulness. What is wrong with being merry and celebrating life? After all, this is the only life you have, so enjoy it!

Overall, I have enjoyed reading this book. Pullman is quite bold here, and doesn't take the time to hide the parallels to modern theology. Religion is definitely the culprit here, and no wonder religious groups don't like this trilogy. I would say this is required reading for all. Not just children. It definitely attacks religion, and for a good reason. Religion, after all, is just a collection of unsupported belief systems that continue to oppress plenty of populations nowadays. Just look at ISIL and what it is doing to innocent people in Syria and Iraq. If people would take the courage and break free from religion, then they would definitely live a better life that this world has to offer them, during their temporary stay in this planet.

I give this book 5 out of 5 stars. Totally recommended.