Book Review: The History of the Siege of Lisbon by José Saramago 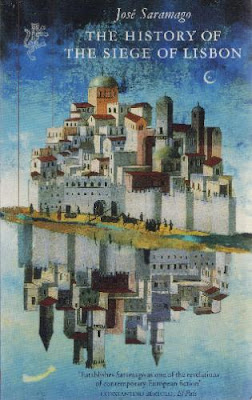 This is yet another enjoyable book from José Saramago. Having read 13 books of him before, he is definitely one of my favorite authors, and this book doesn't fail to deliver. Touching on topics that range from history, historiography, as well as the siege of Lisbon in 1147, and love when one is middle-aged, this book definitely is at times comic and profound, written in typical Saramago fashion.

The book centers on the life of Raimundo Silva, a simple proof-reader who is also a middle aged bachelor, lonely, and living on his own. He has a cleaning lady that comes regularly. He pays for sex every now and then, even though these encounters aren't satisfying either. In short, the most boring character one can imagine. This aspect of the book, having a main character that seems like the most ordinary person on earth, is quite typical of Saramago's novels, as can be seen by the main characters of his other books, like Tertuliano Maximo Afonso in The Double and Senhor Jose in All The Names.

This mistake (or was it a mistake or a deliberate act) resulted in an unexpected outcome. Instead of being fired by the publishing company, he is admired by one of the senior editors, who invites him to write his own history of the siege of Lisbon, without the help of the Crusaders. Raimundo ends up falling in love with this senior editor, Maria Sara, which results in some comic episodes.

Perhaps what I like most about this book is that it touches on the general issues that Saramago is known for, while also tackling seemingly new topics. For example, there are so many passages in the book that reflects Saramago's opinion about religion. Saramago was an atheist, and he has plenty of books that illustrate the folly of believing in a supernatural entity. This book is one of them, as he contrasts the ineffective means of believing in either Allah or Jesus for both the Moors and the Christians.

I also like the fact that this book reflects the continuing motifs in Saramago's work. For example, there is again the reference to a dog. Dogs have been a feature of his other novels as well, including Blindness and The Stone Raft.

Finally, as usual, this book is about a what-if scenario. In other books, Saramago asked what if the Iberian peninsula started to drift westwards into the Atlantic? What if death decided to take a vacation and no human beings died? What if suddenly nobody wanted to vote a government? What if everyone became blind? In this book, he poses the question in a historical context, asking what if the Crusaders didn't help the Portuguese king in recapturing Lisbon in 1147?

Overall, this book overflows with Saramago's amazing writing style and humor. I definitely would recommend this to anyone who is a fan of his work. I give it 5 out of 5 stars.