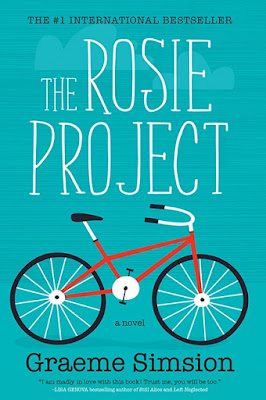 My partner recommended this book to me. He had read it before I did, and as he was reading it, I saw him giggling and laughing hard at times, that I just thought that this is a very funny book. At least that is how it appeared to be. So I figured I should pick it up and have some light reading of my own, for a change.

So what is this book about? It is a book about Don Tillman, a geneticist, who just has a very structured life. His meals are all predictable, there is no variation at all. He thinks that doing this lifestyle is efficient, but actually it hurts his social interactions, and is pretty much a laughing stock of society.

Anyway, he has a project of his own, and that is to find a wife. He has this long questionnaire designed to find a wife, yet obviously, this turns off plenty of women. However, there is Rosie, who is a PhD student, and it seems that Rosie cannot be shaken away even though she has a lot of negative data points from the questionnaire.

Oh well, I won't tell you how the novel goes, but this is indeed a romantic comedy. And yes, sometimes, I found myself giggling while reading this book in the bus or the metro. It was indeed funny, but somehow, there are aspects of this book that I found a little not so believable.

See, this book began with me thinking that Don was a very annoying character. I so wanted to take his head and shake it back and forth to insert some sense into him. And then this feeling just plateaued. And then soon enough, he started feeling, or at least, exhibiting some feelings. He started becoming human. Now this is what I find unbelievable. He is 39 years old. His habits are pretty much engraved in his brain. I find it a little over the top that he would start becoming human and learn to empathize only because he met Rosie. Hasn't he met anyone or hasn't he been in other social situations before where he needed to learn this skill? I just find the transition from robot to human a little too quick.

I do have something I like in this book. And that is the fact that the last third of the book was engaging. Finally. There were times in which I was forced to flip back a few pages, because it made a reference that I didn't really remember, and I had to make mental leaps and connections that were rather implicit, and not overtly mentioned. That aspect I liked, as it showed that the author at least thought that his readers had the mental capacity to perform these inferences, instead of giving everything explicitly.

Nevertheless, this was light reading. No big topics being tackled here. It was however a good break from the other heavy-duty books that I have been reading lately. So yeah, if you want a laugh every other page, then pick this one up. But don't expect it to be profound. I give this book 4 out of 5 stars.