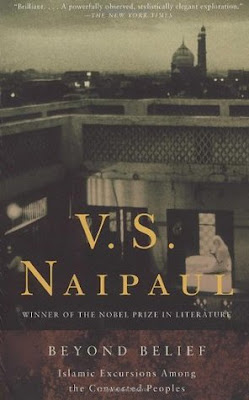 Finally, I have finished this book. As regular readers of my book review series might have noticed, I typically read fiction, and non-fiction book reviews here are mostly the exception than the rule. I picked this book up when I was browsing a used-bookstore here in Berlin, and since at that time, I had become aware of V. S. Naipaul (after reading his Nobel Prize lecture as part of a collection), so I decided to randomly pick this book up so that I could try his writing. Somehow, after reading this book, I have the feeling that it might not have been the best idea.

See, this book is a travel narrative. It chronicles the second visit of Naipaul to four countries who are mostly populated by people who were converted to Islam. Indonesia, Iran, Pakistan, and Malaysia: all of these countries are non-Arab, yet Islam has a strong grip on its population. Naipaul shows how the local population deals with the conflicts that Islam brought upon to the community, mostly along the lines of ethnic and cultural tension. After all, the belief system that together make up Islam is not always compatible with the traditions and beliefs that the locals had before encountering this religion. And this book is basically a collection of stories about the people from these lands, and Naipaul shows how the converted populations deal with this conflict.

So I am confused. On the one hand, I see further evidence why religion is more a force of evil than a force of good. This book is a collection of evidence showing how Islam has altered the belief systems of these populations, demonstrating how rational thought has been surpassed for faith and submission. As an atheist, I read this and see how it is really better not to believe in a religion, due to its negative influences, which in my view, overrides whatever positive influences it might have.

Now why am I irritated with this book? Because reading it makes me feel that Naipaul had an agenda, that he wanted to show how Islam was detrimental to these populations, and therefore he went ahead and visited these countries, interviewing people who would show what he wanted to show. Maybe I was expecting a journalistic style given that it is a travel narrative. But then again this is not journalism.

Or maybe I was expecting something along the lines of what I would expect an anthropologist to write. Maybe I was hoping that there would be no judgment, and that it is up to the reader to judge whether the reader would like the Islamic influence or not. And yet, in many occasions, Naipaul writes how Islam has eradicated the local culture and replaced it with Arabian culture, how through Islam, the pre-Islamic monuments in Pakistan are not attributed value, but rather, all important monuments are in Arabia, all holy deserts are in the Arabian Peninsula, and therefore there is nothing important and noteworthy in one's homeland. Effectively, one's cultural homeland isn't one's own, but in Arabia.

This book made me reflect how religion imposes these cultural beliefs on people. When I was in Jerusalem, I saw pilgrims from all over the world, visiting these holy temples and churches, kissing marble floors and granite stones. They came from Africa, from South America, all over the place. And most likely they have a special attachment to these holy places. The same can be said with the Jehovah's Witnesses. Somehow, the world headquarters of the Witnesses that until now are located in Brooklyn, NY are assigned some sort of holy Utopian status. Everyone just wants to go and tour that place, and everyone who does comes back all glowing and raving about it. Looking back, it was slightly mentally jarring, because I have come across Witnesses who would love to go travel and sight-see, yet they would think twice and sometimes even refrain from entering places like the Sagrada Familia or St. Peter's Basilica, reasoning that these are monuments that are not holy, instead, these are structures that belong to the wrong religion, and therefore are not worth our time. Why can't people simply see it as a cultural monument, something that is noteworthy due to its architecture? Instead, they look at it using religion-tinted glasses.

Overall, this is an interesting book. I am not sure whether I would recommend it to others or not, but it definitely made me think. I give it 3 out of 5 stars.