Book Review: Captains of the Sands by Jorge Amado 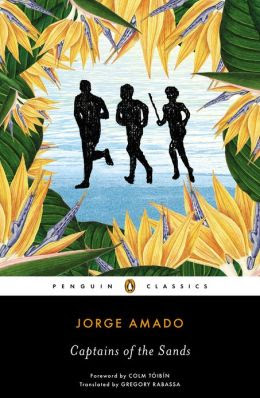 A blog reader from Brazil (Hi Renan!) once recommended me this novel a long time ago. Though I haven't forgotten it, my reading list was rather long and therefore it took a little bit of time to get to it. However, almost a year later, I have finally read this, and I have to say that it provides a very good literary preview of Brazil. After all, I asked for recommendations for books that would provide me a narrative that was set in Brazil. As I haven't been to Brazil at all, reading about it is the next best thing to do in order to get an image of the country. So I started with this book.

What is this book about?

This is a book about street children in Bahia. I don't remember which city it actually was, but come to think of it, they refer to it as Bahia, which most probably refers to the capital of the State of Bahia, Salvador. The Captains of the Sands is a collection of teenage children who are street criminals: they rob people, they have plenty of modus operandi to basically relieve rich people of their belongings. In a sense, this book is like Robin Hood or Oliver Twist, with the main characters being members of society's undesirable sub-group. In this book, the Captains of the Sands are led by Pedro Bala, but there are several other characters, and the book doesn't really focus on one character, but rather, takes the collection of children as a whole as the focus, jumping from one child's story to the next.

The narrative is highly political. I can see it as the author's social commentary. Upon finishing the book, I read the postface and sure enough, there is a political bent to this novel. In fact, Jorge Amado apparently was exiled from Brazil for a time due to his left-wing political sentiments. The book definitely portrays the poor as oppressed, and strongly makes a case for them, even to the point of almost glorifying the crimes that these street children do.

See, this is where I am torn. On the one hand, I do agree that the street children are poor and oppressed, and yes, society is to blame. Society, as led by the rich moguls and aristocrats, these people are to blame when the poor keep on getting poorer and the rich richer. It is not an egalitarian society, after all. However, I still think that the street children need to be punished when they commit those crimes. Maybe I just distinguish between the society and the individual. But I don't think that robbing a rich lady of her belongings or killing a policeman is the way to equalize things. I don't say I am rich, but I have enough money. Does this mean that I am personally to blame when there are starving populations in Africa?

Life is unfair, get over it. When we are born, we're already put into various different classes, and depending on which class we are put in, the rate of success or failure in this single chance of life we are given is different. It is an idealism, a pipe dream, to believe that all humans are equal. I don't think we are.

I used to be a fan of communism. However, history shows that communism in its truest form doesn't really work. Humans are inherently selfish, in my opinion, and so we all try to be better than the next, richer than our neighbor. We all want to have the greenest grass in the neighborhood. And so we try hard to improve ourselves. It just happens that some try harder.

I am not being snobbish here. I guess I am just being pragmatic. Sure, it is unfortunate to have poor street children, but it is also naive to think that a utopian society is possible, where there are no poor people and everyone is well-off. That there is inequality is just a fact of life. In Amado's novel, there are street children who improved their lives, and there are children who were less fortunate.

Politics aside, another aspect that disturbed me in this novel was the notion of ethics and morality. Of course, one must read novels through the lens of the generation they were written in, but I believe there is a limit to that. What disturbed me the most was the gender inequality, especially with respect to sex. The characters make a big deal about "being a man" or doing things like a man, where femininity is seen as a weakness. Latin American machismo is oozing so much out of this book, which I found quite disturbing. I also did not like the characters' notion of sex, especially that inappropriate value to virginity, as well as on rape. Non-consensual sex for me personally is definitely a no-go, and so I find it hard to sympathize with characters who engage in such. It was somewhat bizarrely hilarious to read of this one episode (I believe it was Pedro Bala) where the boy wants to rape this girl, the girl doesn't want it, the girl says that she is still a virgin and wants to remain so, and so the boy says that he would fuck her in the ass instead.

Anyway, like I said, this book provides a literary snapshot of Brazil in the early 1900s. There are definitely plenty of things to improve on, not only on economic but also on moral and social issues. Overall, I liked this book, and would consider reading Jorge Amado's other novels in the future. I give this book 4 out of 5 stars.