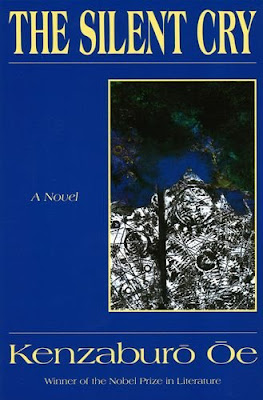 Finally, I have finished this book. I have been reading this for a full month, and finally 270 pages later, I am done.

I should say that this isn't my most favorite book. But I should also follow that up by saying that even though this book began negatively for me, it ended up becoming better, which is why I don't leave a book unfinished, even though I might not like it in the beginning.

See, I picked this up in a used bookstore, as I was browsing. I already knew that Kenzaburo Oe is a big name in Japanese literature, but I just haven't had the chance to read him, so when I saw this book, I opted to pick it up and give him a try.

What should I say? It began quite bad. It didn't capture and captivate me, the reader. I couldn't care less about the evolving story. The characters were all bizarre and grotesque. It confused me, as I couldn't figure out whether it was fantasy (and therefore I should suspend my disbelief) or realism (and therefore I should use my prior knowledge about Japanese society).

The story revolves around Mitsusaburo, an English professor. He only has one functioning eye. He has a wife, and together with his wife, they go back to a remote village in Japan together with his younger brother Takashi. Mitsusaburo also has a friend, who committed suicide, by painting his head in red paint, inserting a cucumber up his anus, and then hanging himself. That's not the only weird character: in the village, there is this very fat woman called Jin, and it seems that she has to eat so much calories, simply because it's an eating disorder that she has and she can't really help it.

Anyway, I hated the first half of the story, and it was quite dragging. However, the second half was better and slowly got me engaged in the story. Most of the characters have exhibited irrational behavior: Takashi has always been insisting that his and Mitsusaburo's great-grandfather was a hero, while Mitsu insists that he was a coward. Everyone just has their own idealism they follow to the death, and I found myself enjoying it when I was reading how their own idealism slowly destroys them.

I also liked how this novel explored the notion of truth. Everyone seems to have a different version of it, and they act upon what they think is the truth. I find it interesting how one event can have multiple different interpretations, and everyone basically sees what he wants to see, given one's preconceptions and idealistic bents.

A third thing I liked is how this novel dealt with Japanese issues like shame, especially group shame. In the novel, there are events that the whole village engaged in, but most of the time, everyone just took part simply because they were not thinking for themselves, but rather, they were thinking as part of a group. People were asking themselves whether they would take part in looting and other illegal activities, and for the most part, people just did it because of peer pressure, more or less. Somehow, it reminded me of the group mentality that I thought was very prevalent even in the modern Japan that I had the opportunity to see, when I lived there 20 years ago.

Overall, I think I ended up liking this book, but not enough to be enthusiastic about it. I am not sure whether this is the typical Oe novel, but I have to say I am not too eager to read another novel of his at this time. I give it 3 out of 5 stars.