Book Review: Istanbul: Memories and the City by Orhan Pamuk 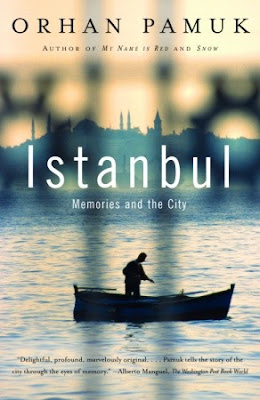 Oh, this was an interesting piece. It is a memoir, but at times, one wonders, whether it is a memoir of the author, or of Istanbul, or both. The thing is, Orhan Pamuk managed to give a history of the city and its various neighborhoods, while at the same time, tying these together to his own life story. And that, methinks, just takes a great amount of skill to accomplish correctly.

See, this is not the first time I have read Pamuk. I have read four novels of his previously: My Name is Red, Snow, The Museum of Innocence, and The Black Book. Though I haven't had a very positive experience on all of them, for the most part I like his writing style more than not, and have decided to read this one given my previous experience. And I am glad that I have done it.

The thing is, I have not been to Istanbul before. But I should say that this book portrays it in a very realistic light. This book is not meant to be read if you want yourself to be amazed with the city. This book is not a travel guide. It is not meant to portray Istanbul as some city that is to be visited. Rather, this book portrays Istanbul as a city that is alive, a city with real people, real problems, real issues. At the same time, it weaves the author's own experience living in the city, being born, growing up, studying, falling in love, and maturing into adulthood.

Another thing I like about this memoir is the candor. Pamuk didn't embellish his story, nor the city, rather preferring to write about his own follies and the city's own not so picturesque neighborhoods. I think he portrayed Istanbul using a viewpoint that only a local can have. It provides a good contrast with the old European visitors to the Orient, visiting Istanbul as tourists and providing a very exaggerated account of the exotic city. Pamuk never exoticized Istanbul, portraying it for what it is, a city that is caught in the crossroads of east and west.

Overall, I liked how this memoir was written. I feel like this exemplifies Pamuk's signature style. In previous books, there always was this nagging feeling at the back of my head that his books were alter egos of his own life story. While the main characters of his novels are not himself, there is always this feeling that somehow he is writing about himself, but from a different perspective. This book makes this link obvious. At one point, it is about the city, but the book makes a slight turn and it becomes about the author himself.