Book Review: To Kill a Mockingbird by Harper Lee 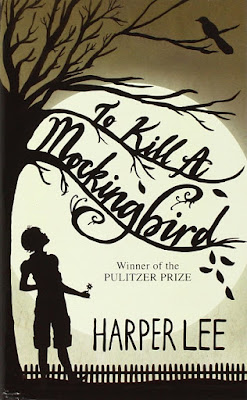 I suppose it is surprising that I haven't read this book until now. It is such a standard in the American literary canon, and yet only recently have I had the chance to read it.

This is the story of a girl growing up in the southern United States. She is raised by her father, together with her older brother. Their mother passed away, so the father is the sole parent, until their aunt goes to live with them. They employ a black woman, and as it is set before the Civil Rights Movement, colored people have less rights here than white people.

Overall the book is about racial injustice, as well as the loss of innocence. In the book, children are portrayed to be innocent, who don't yet have the distinction adults make between whites and blacks and social class. As the book progresses, the girl slowly realizes that life is unfair, and that adults have a different way of looking at things in the world, which the girl slowly learns about.

I suppose I see why this is part of the American literary canon. After all, America had a history of slavery. At some level this book needed to be written and read. Even now in the 21st century, the issues this book raises are still live and relevant. Just look at the US election.

However, perhaps this book was preaching to the choir. As I was reading it, I found it predictable, and not engaging. I was having plenty of "duh" moments, and while I recognize several instances where the author intended the reader's heartstrings to be pulled, perhaps I was too jaded and just couldn't care less.

So perhaps while I enjoyed reading the book as I followed the adventures of the girl, at the same time, I was thinking and telling myself that life is unfair, this world is messed up, we knew that already. Perhaps the book was more of an idealist, and I have simply resigned to being a pragmatist.

In any case, I think I liked this book, but not enough to say I was blown away by it. Definitely not enough to immediately search the other book and some call a sequel and read it. I give it 3 out of 5 stars.