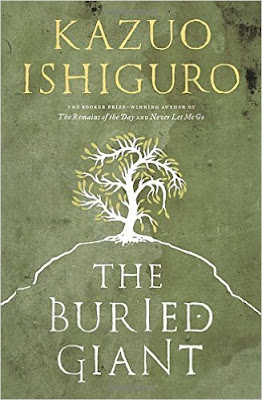 I am not sure about this book. Perhaps it is because it is a style that I didn't expect, given that I have read several books from Ishiguro in the past. I was expecting something different, not a fantasy book that was set in post-Roman Britain.

Anyway, what is this book about?

This book narrates the travels of Axl and Beatrice, who are two elderly Britons traveling to meet their son. In the meantime, they meet up with Wistan and Edwin, a Saxon warrior and a young boy, who seems to have an interesting wound that is life-threatening. They also meet up with Sir Gawain. Each character has some sort of goal in mind, and so it is crucial to see and understand what everyone wants, since not everyone agrees with the goals of other people.

While reading this book, I had a sense that things were blurry and unclear. It almost gave me a headache, literally, since there seems to be a fog in my head, at least that was what the writing style was conveying to me. And later on, I found it rather nifty, since even the characters in the book had the same affliction as me. This is because a crucial part of the plot is the she-dragon Querig, who is alive, and whose breath actually erases people's memories. Of course, some people want her dead, so that their memories come back, and some people want her alive, so that they can exploit the lack of memories in the whole land.

As I persevered in reading this book, I slowly liked it. After all, Ishiguro makes you think. This book does the same. Nevertheless, I should say I am not a fan of fantasy. Even though the narrative is thought-provoking, and there are crucial issues that this book is tackling, I cannot say this is my favorite Ishiguro novel. Comparing this one to his other books, I should say that sometimes I found the narrative a little bit painful and excruciating to read.

And again, this is fantasy, and people are traveling. I still haven't come across a book that is a fantasy but doesn't involve traveling as a plot-moving device. In this case, it is used extensively, as Axl and Beatrice go out of their village to find their son, and meets various characters along the way during their journey. I therefore am very inclined to conclude that it would be very hard to find a fantasy novel that doesn't involve traveling.

Overall I think I am giving this book 3 out of 5 stars. It is not the best Ishiguro novel I have come across, but nevertheless it makes you think.