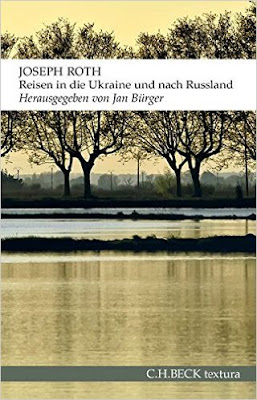 This is the first time I have read a book in German, in its entirety. I haven't really thought of reading books in German until a colleague gave me this one as a present, a book containing a collection of travel essays written by Joseph Roth. Roth was an author I was not familiar with, and truth be told, I only encountered him in the context of this book. He was an Austro-Hungarian Jewish writer, and during the late 1920s, between the two world wars, he traveled to Eastern Europe, from Lviv, to Moscow, to Astrakhan, and to Baku. Based on these trips, he then wrote a series of essays which were published in the Frankfurter Zeitung. And this book contains reproductions of some of these essays.

I must say that it was an interesting experience reading in German. German is by no means my most fluent and proficient language, and there were parts of it that I didn't completely understand. There were times when I just derived the meaning by the context, because there were some words that were unfamiliar to me. There were times when I caught myself translating things to English, even though I didn't have to, because an English translation didn't really add new information to me. But overall, I found myself gradually liking the experience more and more as I delved further and further into the book, to the point that I am definitely considering reading in German from time to time, if anything, to improve my German language proficiency.

If Roth's goal in writing these travelogues was to convince the reader to visit the area himself, then perhaps he has succeeded. He is an amazing travel writer, and he picks up the subtle nuances of a place, describing things in powerful detail, from the color of the houses to the smell of caviar permeating the atmosphere in Astrakhan. He also describes things and situations with honest realism, deconstructing the ideal dream that the Soviet Revolution has brought upon the people living in the countryside, people who mistakenly took the Revolution as an element of progress, when in fact, the things they wanted and aimed for, things like electricity, tractors, modernity, these things, were available, not because of Communist ideals, but because of capitalist progress.

Anyway, I must say this opened a new genre of reading for me. My level of German proficiency may not be enough to tackle hard philosophical works yet, but it definitely is enough to read travel essays and other similar narratives. I give this book 4 out of 5 stars.