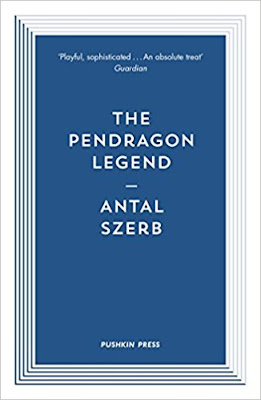 Oh man, I devoured this. This was a book that just kept me on the edge of my seat, while putting a smile on my face at the same time.

See, until now, my experience with Hungarian literature was rather bleak and depressing. The books I have read before written by Hungarian authors were all dark and wallowing in melancholia. So this is a refreshing change. The Pendragon Legend is actually a satire and a Gothic novel: it incorporates plenty of references to the occult and mystical societies that the author was highly interested in, in a murder mystery format that somehow reminds me of the dark Gothic novels by Mary Shelley or Emily Bronte. And yes, this is gripping. I finished it in just a few days.

The Pendragon Legend is about a Hungarian scholar, Janos Batky, who is doing research in the British Museum. Somehow this character is almost autobiographical, and there are plenty of parallels between the author's interests and the main character's. He gets invited by a certain Earl, to his castle in Wales. And this is where strange things start happening.

First, there was the telephone call that warns him not to go. Then there are the strange noises and weird occurrences. The mysterious deaths. The devilish rituals. There are just so many elements of the occult that pepper this book, that for all intents and purposes it could be classified as Satanic by the conservative, but at the same time, there are also funny moments that break up the tension.

I am not a big fan of the occult nor of European mysticism, but I must say that this book was well-researched. Real characters are referenced in multiple parts, and it makes me wonder why people back then were so obsessed with these mysteries. I suppose people wanted to turn metals into gold, and other people wanted to become immortal. These were the prevailing desires back then, that is, until the Age of Reason illuminated European history.

Anyway, this novel might not be the most profound, but nevertheless I recommend it for some light entertainment. And of course, as a diversion from the darker offerings of other Hungarian writers. I give it 4 out of 5 stars.