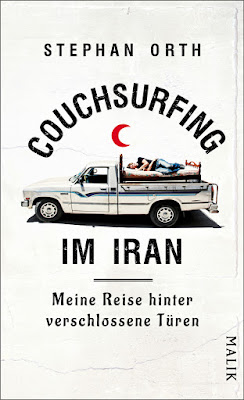 Continuing on my goal of reading books in German, I picked up Couchsurfing im Iran by Stephan Orth. I am sticking to travel narratives for the moment, as it seems this genre is the easiest to comprehend given my German language abilities. Anyway, one other thing I liked about this book is that the author went to a destination that I also have a high interest in, that is, Iran. While the author went to Iran two years before me, there were plenty of things he narrated that sounded familiar to me. Not only were we using the same edition of a guidebook, but at times, we even stayed in the same hotel. Even though he and I didn't go to the exact same places, there was enough overlap that reading this more or less transported me back to September 2016, when I was in Iran for 3 weeks.

There were major differences too, of course. He was couchsurfing all throughout his trip. I stayed in hotels, hostels, and guesthouses. I guess I was more of an introvert than him. Even though I am a member of Couchsurfing, and have surfed and hosted several people in various locations, I suppose I wanted to travel in Iran alone. Iranian couchsurfers have a reputation for being very much involved in the lives of their guests. While that might sound lovely, I also wanted alone time. And I didn't want to be rude. So I didn't go for it.

Not to mention that it is illegal.

Speaking of which, the book narrates plenty of things that are de jure illegal yet actually happening in Iran. You know, BDSM parties, bikini parties, alcohol, and so much more. I am a little bit torn by this. On the one hand, I take the stance that I respect the laws of the country I am visiting because I am a guest. But on the other hand, there are plenty of rules in Iran that do not make sense, that curtail personal freedoms, and that limit the lives of visitors, not to mention locals. While I have very positive impressions about the Iranian people, I would say less about the Iranian government.

I suppose this is a good segue to the question of whether it is ethical to visit Iran or not. I enjoyed my visit, and even though I did not couchsurf, I have met amazing locals and experienced the jaw-dropping hospitality of the strangers I have met. I know that when I visited, financially I have contributed to the benefit of an oppressive regime, but at the same time, I suppose by visiting, I have also made my contribution on showing locals how the outside world might be like.

Or maybe I am just selfish, and I wanted to experience something new.

In any case, what this book definitely shows is that there is a wide and varied world in Iran, beyond the images that the media portrays. Every time Iran is in the news, it's about something bad, whether it's about the execution of homosexuals, or the rights of women, or oil. But beyond that lies a very diverse world of people who have similar values as ours. It is just sad that the system is set up such that it is quite hard to change things. It is sad that there are people who still think that earthquakes are caused by women exposing their breasts. It is sad that there are powerful people there who don't subscribe to the adage "Live and let live".

I would love to visit Iran again. Maybe sometime in the near future. In the meantime, this book allowed me to revisit amazing memories and relive my experiences within the country. It is unfortunately only written in German, otherwise I would gladly recommend it to the English-speaking world. I give it 5 out of 5 stars.