Book Review: Johnny Got His Gun by Dalton Trumbo 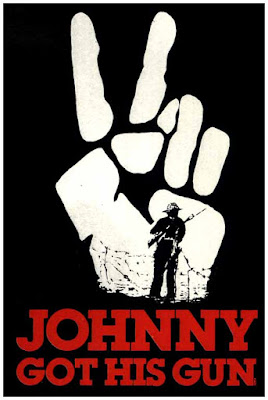 Urgh, this was maddeningly powerful. Imagine a man, who had all of his limbs amputated, as well as all of his senses removed, since somehow, his eyes, ears, nose, and mouth were all blown away by an explosion. But he still has a brain, and he is fed through a tube. He basically is a thinking piece of meat. This is the main character of this very gruesome and graphic novel against war.

Published in 1939, this is perhaps Dalton Trumbo's most known work. I personally haven't known about this book until I read it in Reddit somewhere as a recommendation for one of the most shocking novels to read. And indeed it is shocking. It puts the effects of war in personal and raw sensational terms. See, the thing is, most of the time, when there is a war happening, it is far away from us. We don't really know what war means. We have this idea that we engage in war because we want to spread democracy. The United State does this a lot, given that it is a world power. However, every time war happens, it is far away from the home turf, so for the most part, people don't really grasp what war actually means.

See, Americans (and most other Western people for that matter) don't have contact with war. They don't have a war to escape from, which would necessitate them crossing the sea using a fragile dinghy. There is no actual bomb exploding in Chicago or Los Angeles. Instead, all of the wars that Americans are participating in are far away, in Iraq, in Afghanistan, in far away places, places where one can simply watch what is happening from the comfort of one's television set and living room sofa.

Sometimes it is needed to make war palpable. Sometimes perhaps it is needed to make war pull some heart strings. This is what this novel is trying to do. If you have a heart of stone, then perhaps this book won't do it. But if not, then you'll probably read this book and squirm every now and then, as you read how Joe Bonham is determined to get out of his own mental prison.

I must say it is a hard book to read. It is one of those books that I suppose exists as a thought experiment, because I would never want to be in Joe Bonham's place. I cannot imagine how I would deal with such a situation myself, if I find myself trapped in my own body. I would probably want to find ways on how to die. And yes, the main character does want to die, except apparently it is against the regulations.

What this emphasizes is the primacy of life, in this world. A lot of religions put emphasis on the importance of the after world, or life in heaven, or life in paradise. But as this book points out, even people who are suffering have it better than being trapped in one's own body. Life is wonderful, and everyone should make efforts to enjoy it. So if anyone tells you to suffer now so that you could enjoy the afterlife, you should run away from that person as far away as you can.

So yes, pick up this book, and learn something. Learn to appreciate the life you have right now. It definitely will make you aware of the things that you typically take for granted. I give this book 5 out of 5 stars.