Book Review: The Sexual Life of an Islamist in Paris by Leïla Marouane 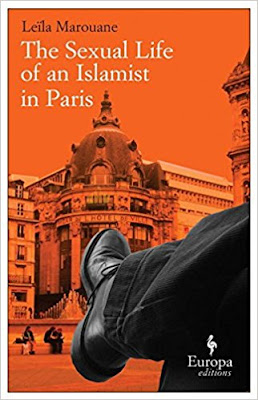 Oh my god. This is such a mind-blowing book.

I decided to pick up this book as part of my efforts to broaden the cultural base of the books I read. I recently realized that since I typically read in English, most of the books I read are written by British or American writers. And that is sad because there's a plethora of good books out there that are worth reading, yet I do not hear about them because the reading environment I typically inhabit don't publicize these books nor their authors. So I decided to make an effort to actively search for writers (and their books translated to English) from every country in the world. Hence, I picked up The Sexual Life of an Islamist in Paris by Leïla Marouane, who hails from Algeria. I haven't read an Algerian novel before, and I must say, this one is a blast.

See, this novel tells the story of Basile Tocquard, formerly known as Mohamed Ben Mokhtar, a wealthy banker in Paris. He is the son of Algerian immigrants, and his mother is still alive, living outside of Paris. As is typical with many people with immigrant backgrounds, his family is quite conservative, trying to preserve what they think is a holy and virtuous way of living, while living in a land whose native population are infidels. This provides a stark contrast with the next generation, who may not be as conservative as their parents, and prefer the modern and liberal ways of thinking that are prevalent in the host country, in this case, France.

Our hero goes through painstaking ordeals trying to integrate and blend in, by straightening his curly hair, whitening his complexion, and even changing his name to something that sounds more native French. And he tries to move away from the clutches of his family as far as possible, by moving out of the suburbs and into the ritzy neighborhoods of Paris.

Unfortunately, traditional ways aren't too easy to shed, and so his family somehow catches up with him. This whole song-and-dance actually results in a series of tragicomic scenarios, with the conservative family worrying about marriage, prayers, and other social constructs, while the modern wannabe just wants to have a fuck. As the title alludes to, the main character is one horny individual, who couldn't care less about facing Mecca while praying, or about the fact that his family expects him to get married anytime soon. After all, he's already 40. All he cares about is fucking some woman's vagina with his penis. Yes, at 40, he's still a virgin.

Anyway, the book chronicles his attempts at female conquests (spoiler: he doesn't succeed), while at the same time showing how he slowly descends to madness. After all, his life situation can make one lose one's mind. The ending is actually too tragic, and unfortunately it reflects well the realities of many people in similar situations like him, in real life.

I can relate to plenty of aspects of this book. I am not an Islamist, but nevertheless, I come from a conservative background. My parents didn't push me to getting married within the confines of tradition, but they pushed me to other traditional directions. I did push back, of course, and at times I thought I was losing my mind. Perhaps the thing that saved me was distance: unlike Basile Tocquard, who moved from his family's house in Saint-Ouen to Paris, which was a mere 6 kilometers away, I moved to places that were thousands of kilometers away from my family, putting several time zones in between as a buffer. I recall years ago, when my parents would ask me, "Do you already have a Bible study? Are you already a ministerial servant?" These questions would be asked over and over again, and I suppose if I were closer, these questions would be harder to dodge.

On a bigger scale, I also appreciate the fact that I can relate to this novel even though I do not have the Arab immigrant background. I have encountered plenty of Filipino and other Asian immigrants to different countries, and the stories are similar, if not the same. I find it bizarre that almost every immigrant community still thinks that their own traditional immigrant ways of thinking are still superior than the ways of their host country. I don't understand how one can live in a country they despise: if they really think that their own traditional culture is way more superior than the culture of their hosts, then why are they still living there? They might as well come back home.

Perhaps the fact that I grew up as a Third Culture Kid allowed me to see things differently. I don't long for Filipino things, I never had a goal of getting married to a Filipino, I never held Filipino traits and cultures higher than others. Every culture has its own ups and downs, and so I just pick the good parts and discard the bad parts of every culture I encounter.

Finally, the other thing this book addresses is mental health. Having a conservative family while trying to break free from conservatism can be damaging to one's mental health. I myself have gone through years of professional counseling to protect my mental well-being. Unfortunately, others don't have such resources available to them, including the hero of this book. And unfortunately, this results in people committing suicide, or in the case of our hero, going insane.

Overall, this is a very enjoyable book. It is multifaceted, and is at times funny and at other times quite tragic. The narrator is rather unreliable, but once you reach the end, you'll see that it is quite a sad affair. It made me think, and I am sure it will make you think as well. I give this book 5 out of 5 stars. Totally recommended.