I must say that this was partly a foodie trip. Bruges had so many good brasseries, which I ended up trying some since I wanted to avoid the tourist-oriented places that sell only moules frites and vol-au-vent. So I found places that were slightly fancy. And Antwerp on the other hand had a very culturally-diverse population, which meant that there were so many international restaurants I could have tried. 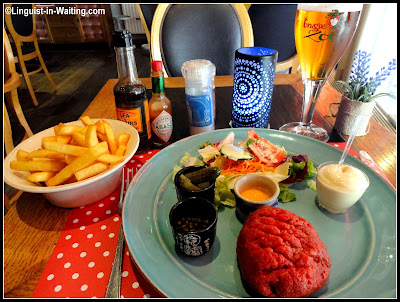 Let me start with lunch. On Monday, I somehow stumbled upon this brasserie, where there were three elderly ladies dining by the window, plus a couple of other people at the patio. Since all of them were speaking Dutch, I figured they were locals, and this might be a good choice. I forgot to take note of the name of the restaurant, unfortunately. I ordered a steak tartare. I suppose plenty of (English-speaking) visitors don't actually know what steak tartare is, so the waiter actually asked me if I knew what it was. I said I did, so he asked if I would mix it myself, to which I agreed. The picture above shows this, and I must say it was good, but not the best steak tartare I have had. I prefer the Polish version perhaps, and to be frank, this one actually sent me to the toilet a couple of hours afterward. Thankfully, it wasn't too repetitive. 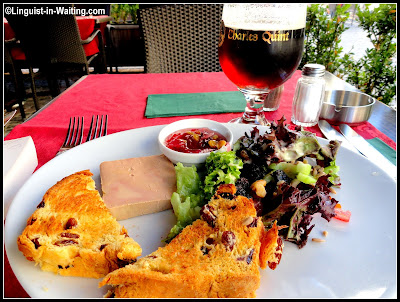 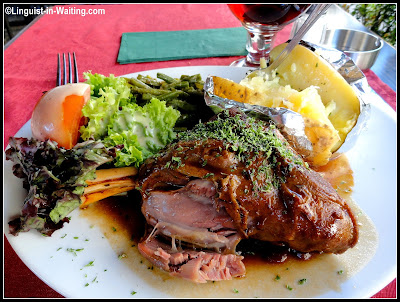 For dinner, I went to T'fonteintje, which was a brasserie that offers interesting prix fixe menus. They consist of a starter, followed by a main course, and ending with a dessert. I chose the duck liver pate to begin with, followed by a lamb shank. This was good. The beer they recommended was also quite matching to my dish. Since I was in Belgium, I tried to drink varied beers as much as I can. 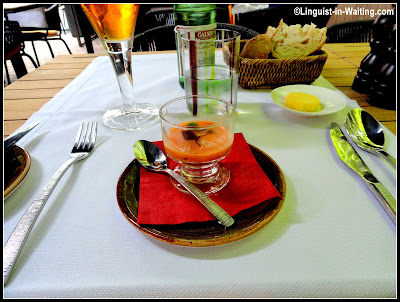 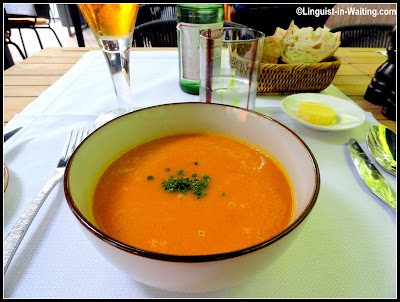 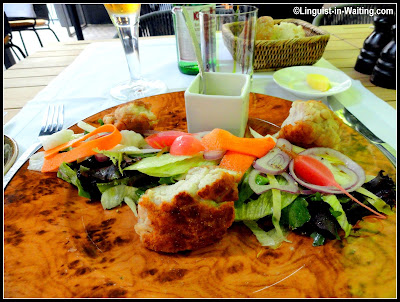 On Tuesday, I had lunch at Den Dijver. This is actually a beer restaurant, and this time, I ordered the soup of the day, which was carrot, followed by sweetbreads and vegetables for the main dish. They also gave me a small serving of the salmon gazpacho as an amuse-bouche. This meal was rather memorable because it was the first time I actually encountered sweetbreads up close and personal: I have eaten them before, but only in very small quantities as part of some dish. This was actually the first time in which sweetbreads were the main component of the dish. I found it very delightful to eat, and even though it is an internal organ, it didn't have the typical internal organ smell that perhaps throws people off.

Dinner of Tuesday was special, but it is special enough to warrant its own post. Stay tuned with that. Let's move on. 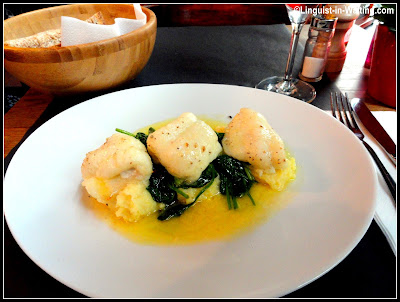 On Wednesday, I took the train to Antwerp, and after finding my hotel, I headed out for lunch. There is a neighborhood just south of the Grote Markt which is composed of small alleys lined up with several restaurants. I found a small bistro, Ernest, where I had lunch. I took the fish fillet with baked spinach. I also drank a kriek lambic, which is Belgian cherry beer. That was quite tasty! 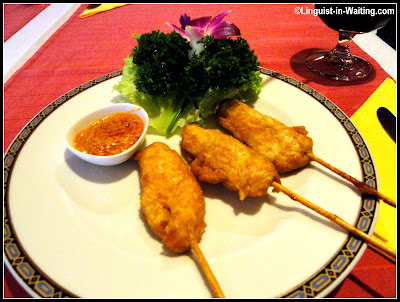 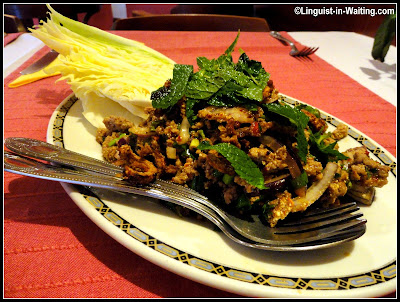 For dinner, I took a stroll along Antwerp's Chinatown, and found Seree Thai, a restaurant that was filled with several Thai-speaking women. I figured this must be good since the Thai people themselves were eating there. I ordered a chicken satay as a starter, and I followed that with spicy larb ped, or chopped duck salad. The Thai waiter spoke only Dutch and Thai (no English), but thankfully, I spoke German, and somehow we pieced things together. She asked me where I was from, and she told me that she knew I would be able to eat the spicy dish, since apparently many Belgians don't (therefore they make it mild). So when I asked for spicy, she gave it to me spicy, and it was super good! 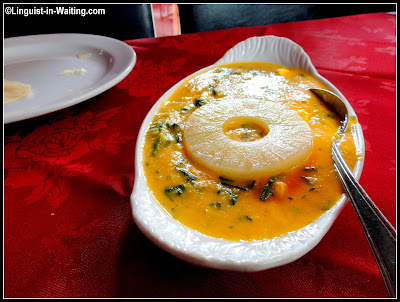 I suppose not every meal I had was stellar, and my lunch on Thursday was one such item. I had lunch in Taj Mahal, near Antwerp Centraal Station as well as the Diamond District. There are plenty of Indians (as well as Orthodox Jews) in the Diamond District, as after all, this is their business. So I thought that an Indian restaurant would be a good choice. That was a wrong assumption. The paneer korma I received was rather pathetic, and more soupy than stew. If I were in Antwerp again, I would not go there for a second time.

The same could be said for my dinner, which was at Gojo, an Ethiopian restaurant. I forgot to take a photo, but it doesn't really matter, since it wasn't my best Ethiopian meal. I ordered the kitfo, which is the Ethiopian version of a steak tartare. I must say that it was mediocre, and I could get way better kitfo in my favorite Ethiopian restaurants here in Berlin. The kitfo I got was bland, and the restaurant was more style than flavor. 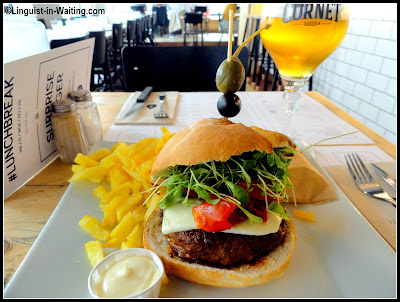 For lunch on Friday, I found myself in Mechelen, a small city about halfway between Antwerp and Brussels. I was there for a daytrip, and I went to Il Cardinale, a swanky burger place. Unfortunately, as with the previous restaurant, this place was more swank than flavor. The caprese burger was too cooked (medium-well I think), when my favorite settings was rare (they didn't ask, and I forgot to tell them). The bun also was a little tough to bite, and the fries were okay, but nothing to write home about. The one thing I liked was the beer, which was rich and potent. 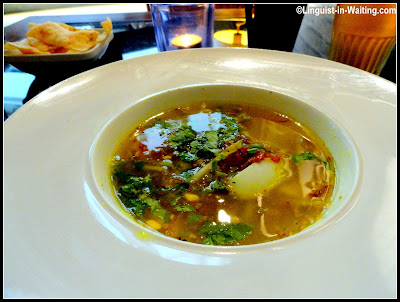 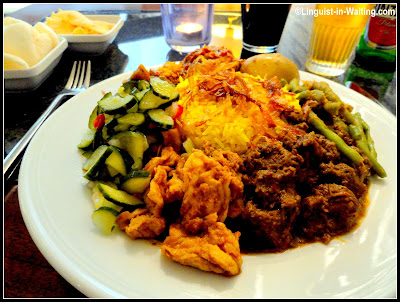 I suppose I had a better choice for dinner, which was in Kartini, an Indonesian restaurant in Antwerp. I had a soto ayam for a starter (it's a soup that is quite similar to the Filipino batchoy soup), and I followed that with the nasi kuning platter, which provided a good variety of different Indonesian dishes. This is a great place, which I would consider going back to in case I am in Antwerp again. It is good enough that it definitely puts Indonesia on my places to visit list. 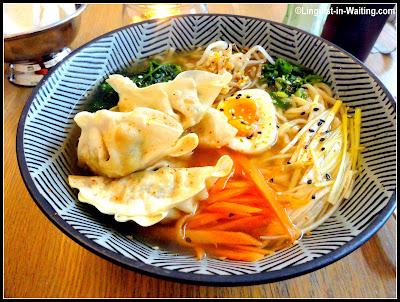 Saturday was my last day in Belgium, and for lunch, I found this Japanese ramen place, Nani. The ramen was good, but not my best. It is actually run by Nepalese cooks, and while the ramen was quite sophisticated, I think the chef still needs to study how the broth should taste like. Something is off. That said, I think the place has potential, and is a good addition to the restaurant scene.

These were my meals during my short visit to Belgium. I haven't discussed one meal still, which was my dinner for Tuesday night. This is the topic of the next post, because seriously, it was more than a meal. It was an experience. Stay tuned.