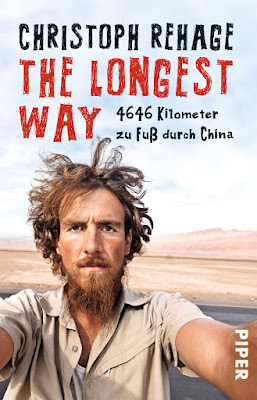 You probably have seen a video in YouTube of a German guy who decided to walk from Beijing to Germany. It was entitled The Longest Way, and when I saw that video years ago, I thought that was kind of a cool idea. So when I saw that the guy's experiences were actually written down into a book, I decided to read it. It also fits in my task of reading travel narratives in German.

Anyway, this book covers not the whole trip from Beijing to Germany, but rather, just the first 4646 kilometers from Beijing to Ürümqi. At times I was annoyed, at other times I was impressed, and overall I liked the book. There were times when I was annoyed because he would write of the stupid things he did on the road, and I was in the back of my head thinking that if he knew how to plan his trip then it would have been better. Then there were also the few times when he would act like a privileged white European looking down at other people, but at the same time these episodes would turn itself and he would realize his folly. The thing I find the most impressive, however, is this guy's determination. His rule is to walk, so no matter how many opportunities there are to take a car he wouldn't take it. This guy sticks by the rules.

I am glad that the author has a dream, which becomes real step by step. But I also realize how much he is missing out on many other things. Human relationships for example are fleeting. He doesn't have good long-lasting relationships, and in the end, he loses his girlfriend because of the fact that he wants to walk. I don't blame Juli (his girlfriend) for breaking up with him. Juli seems to have lost patience waiting for him to arrive, and be by her side. As someone who experienced being abandoned by one's own family, I can definitely sympathize with her.

In the end, the only meaningful relationships the author has seem to be the ones with the people he meets on the road. Whether it is Uncle Shen, Teacher Xie, or the many other Chinese he meets as he walks from one end of the country to the other. Perhaps I find that slightly bizarre, because I feel like there's a huge chance or opportunity he is missing out. As someone who has a background of moving around the world for a few years at a time, most of my friendships when I was younger were more or less fleeting. So I definitely work on my relationships, holding on to them as hard as I can, hoping that they would last a long time, even though I don't believe in forever. With that background, I suppose I cannot wrap my head around the differences in priorities between me and Christoph Rehage.

In any case I must say I liked the book. Sure, walking from Beijing to Bad Nenndorf might sound like an adventure, but it is definitely not my cup of tea. I have other adventures planned, perhaps not of that scale, but they are adventures nonetheless. Nevertheless, I am glad that there are people like Christoph Rehage who have the time and effort to implement these adventures, so that other people like me can read about it. I give this book 4 out of 5 stars.