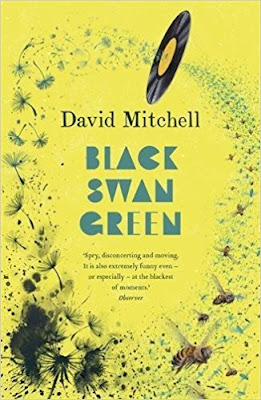 I am not sure how much people love their teenage years. I personally don't have fond memories of mine. During the teenage years, the world typically is a weird thing, with popularity being a very important concept, and people typically get ranked, to the point that low-ranked people are more or less treated like they are the scourge of the earth. Bullying is also an issue, which produces great mental stress, not to mention the fact that this is also the time when parents might fall out of love with each other and get divorced. There are plenty of issues to navigate, and these make up the topics of David Mitchell's novel Black Swan Green.

The main character is Jason Taylor, a 13-year-old teenage boy who has a speech impediment. He stammers, and because of this, is the target of other boys' bullying tactics. The novel has 13 chapters, each chapter corresponds to one month, from January to the next January. It is a bildungsroman, and Jason Taylor slowly develops from a very fragile boy with low popularity to someone who can eventually face the world.

As I was reading this, I thought that I could definitely relate to these issues. I wasn't the most popular kid in school, when I was growing up. I cannot say I was bullied, but perhaps that was only the case because I always was the new kid. Because of my father's career, we would move from one country to another, and so sometimes, the lack of language skills more or less shielded me from bullies. I mean, yes, I remember there were attempts, but because of the language issue, I didn't actually understand what was going on, so I didn't react the way they wanted me to react. So I guess they just got frustrated, and targeted other people.

When I started reading Black Swan Green, it took me a while to get to the rhythm of the book. At first I didn't like it, but the narrative eventually grew to me. And since I have read four of Mitchell's other novels, somehow there are inter-textual elements that would link this book with his other books. I always enjoyed that. And yes, I am also happy that the bad guys don't get away scot-free.

Overall, this is a book that inhabits my head even after finishing reading it. It makes me think, it makes me reminisce on my own teenage years, and it makes me reflect on how much things have changed since then. I am not sure this is Mitchell's most stunning book, as I think I reserve that for Cloud Atlas. Nevertheless, this book still explores the idea that everything is interconnected somehow, even in a small scale like in a rural village in England.