Book Review: Home Made in India by Christopher Kloeble 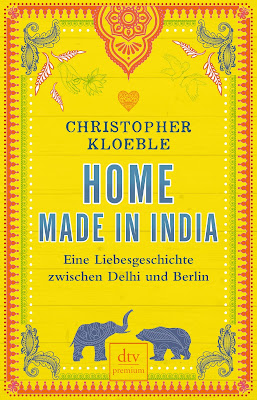 Multicultural relationships across continents - does this sound attractive to you? This issue is the topic of this German non-fiction book I recently picked up. This is a book that made me think. In some ways I found several parallels to my own experience, and in other ways, I found that the author has a perspective that I would never be able to have. Anyway, let me provide a background for a second.

The author is a novelist, a German guy who is the same age as me, who grew up in Bavaria even though his parents weren't Bavarians. Apparently, Bavarians always saw him as an outsider, and he never really fitted in the small tight-knit community of the village they were living in. Anyway, one thing led to another, and in one of his activities as an author, he meets Saskya, an Indian author. A relationship blossoms. And now they need to figure out where to live.

The problem is, Saskya feels so at home in Delhi while Christopher is not, and Christopher on the other hand knows Berlin like the back of his hand while Saskya doesn't. So their solution is to live half of the year in Berlin and half of the year in Delhi. And through his process of commuting between two continents, Kloeble writes how he had to re-learn how to be German. In my own words, I believe this is what happens when one sees data points challenging one's theory of the world, and therefore one has to revise them accordingly. It happens a lot when one travels and sees a new part of the world.

There are plenty of issues in this book that relate to the issue of cultural relativism. Kloeble often mentions situations where it can easily be seen that the German system is better than the Indian system, or situations how India can further develop. But at the same time, he (or rather Saskya) provides an alternative explanation, showing how it might nevertheless be a positive situation, no matter how it might fail the standards of the West.

While I find this reasoning interesting, I do not wholeheartedly embrace that. I won't embrace every foreign thing just because someone is waving the flag of cultural relativism in front of me. Embracing foreign cultural aspects is fine, but there is a moral and ethical boundary that shouldn't be crossed. To take an extreme example, I shouldn't be embracing female genital mutilation just because some cultures practice it. The same goes for honor killings. And women's rights shouldn't be sacrificed in the name of culture. I had a hard time figuring out how far Kloeble's embrace of foreign culture goes, and I am afraid the stance he takes in the book is a slippery slope.

Let me shift topics a little bit, and talk about the concept of home. Kloeble talks a lot about it, about how it is important for someone to feel at home somewhere. This strikes a personal chord for me. I am a Third Culture Kid, and I have lived in several cities located in several continents during my formative years. So I find it definitely very hard to define what home is for me. For the most part, home for me is typically defined as where I currently am residing. So reading Kloeble's experiences about navigating Delhi and being an expat, plus all the emotional aspects surrounding it, definitely gives perspective. It is a viewpoint that plenty of people have, and something that I definitely have a hard time relating to. I used to be able to pack my apartment in an afternoon, if ever I needed to leave. That illustrates how mobile I was. I consciously tried not to plant roots in the past, ready to move to my next city if needed. Thankfully things have slowly changed, roots have been planted, and my mobility in general is slowing down. I still travel, but I do like my home base at the moment, and I think I am here to stay.

In any case, I learned a lot from this book, and the thing I value the most is the alternative perspective of a person with roots who gets uprooted every year to live in a foreign country. There are several parallels between the author's and my own experiences when it comes to living in a new country. Some of these can be frustrating at times, and I suppose over the years I learned to cope and deal with it, turning on my survival instincts so to speak.

Overall I liked this book, and definitely recommend it. I give it 4 out of 5 stars.