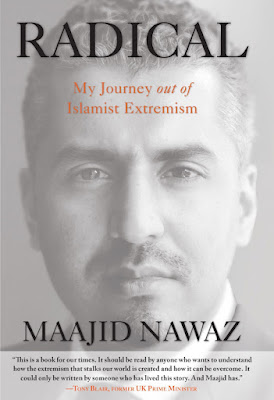 Every now and then I would pick up a non-fiction book. And for some reason I have had this book on my list for quite a while, and I finally got the chance to pick it up. It is a very enlightening book, and while I am fortunate to not have personal encounters with (extremist) Islamism, I find plenty of parallels between the way extremist groups gain membership to my own experiences as a cult survivor.

Radical is actually a memoir of Maajid Nawaz. To be honest, I don't remember now how I came across his name. Perhaps it was via Twitter, or because every now and then I do follow articles that are critical of religion. In any case, I was curious about radical Islam, not because I wanted to join them, but more because I wanted to see what happens in the minds of these people which pushes them to join. And it seems I find plenty of similarities with how Jehovah's Witnesses gain their members.

See, imagine somehow who is disenfranchised by society, a minority, who feels that the world is out there against him. There is an established system, but the system prefers other people, and doesn't protect him. Eventually, this person would feel alienated and sooner or later they would decide to take things into their own hands. They would then be prime mental real estate for radical thought, and like a cult, they would then be told to only hang out and associate with people who share the same thought. People who don't are treated as enemies. This separation then creates a mental barrier, where the only thoughts one encounters are the ones that fit their radical narrative. It then becomes harder and harder for the individual to see alternative explanations, as well as alternative scenarios, and alternative hypotheses.

Similar patterns can be observed in radical religions or cults. Individuals that get recruited typically are those who have a weak moment. In the case of my parents, for example, they were having a bad patch in their marriage, and they were not getting satisfying answers from their religion. This created a vacuum which was easily filled when the Jehovah's Witnesses came knocking at their door. Then they were told to stop associating from people outside of the organization. Eventually the only narrative they were willing to entertain was the cult's own.

When I see this and generalize, I cannot fail to see the importance of exposure. Whether it is by travel, or by interacting with people with beliefs other than yours, or by reading other types of literature, testing one's beliefs against a multitude of other scenarios is still the best way of forming one's beliefs. Extremism exists in some part because these people fail to entertain the devil's advocate. But when they do, then extremist views typically fail and collapse. This is what happened to Nawaz while he was in an Egyptian prison.

One thing I really liked in this book is the primacy of human rights, as well as freedom of speech. And this is a very fine line. There is this paradox of tolerance. If you claim you are tolerant, then would you tolerate intolerant views? This issue is very relevant now. We know what the Nazis have done in the past. Would you allow Nazis to do a demonstration now? Nawaz takes the stand which is most summarized as the following: "I disapprove of what you say, but I will defend to the death your right to say it". This statement is credited to Evelyn Beatrice Hall, who wrote it as an illustration of Voltaire's beliefs. Nawaz goes on to add that there is a separation between the human being and the organization: we attack ideas these intolerant humans might be broadcasting, but not the human being itself. It is a very fine line, and I admit, I am still struggling sometimes how it fits with my own beliefs regarding religion. See, I find myself vacillating between taking a hard or soft stance on religion. As an atheist, I came to this conclusion after seeing the negative effects religion can have. And sometimes I find myself having a hard time deciding whether religion is overall a negative factor for society, and therefore should be eradicated, or whether it still has a positive side, or whether there are still people who need it, and therefore I should just let people believe if they want to believe, as long as they don't force it on me. I revisit this question every now and then.

Another aspect this book emphasizes is the importance to do research. There are plenty of people who claim to be believing in something, but it turns out that upon further examination, they don't really know why they are arguing for some particular belief. In Nawaz's world, he encountered Islamists who don't even realize that what they were campaigning for wasn't even organic in Islam. In my world, when I was still a Jehovah's Witness, I encountered plenty of people who don't even know the history of the organization they belong to. And so when I started doing research, and saw how the beliefs fluctuated over time, with glaring inconsistencies, then things just started falling apart. I would not be surprised if current Witnesses don't even know some of the crazy doctrines that came and went in the organization, since all of the changes are just being swept under the rug, claiming that "the light gets brighter and brighter".

Overall, I was fascinated by this book. I give it 5 out of 5 stars.