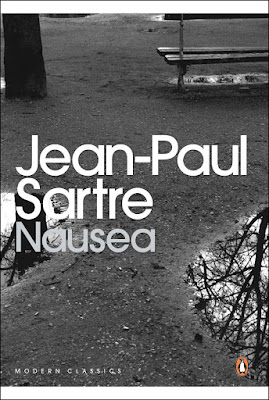 Oh jeez, cry me a river.

Sometimes, you pick up a book, and as you read, you realise that you won't want to pick up another book by the author again. This is one of those times. I don't even remember how Jean-Paul Sartre ended up in my reading list. But chances are I wanted to increase and broaden my horizons, hence I picked this up. Alas, it was a decision I shouldn't have made. Then again, I read a book all the way to the end even though I don't like it, hoping that it would improve, but this one just didn't.

The main character of this novel (which is narrated in the first person) is Antoine Roquentin, a loner historian, who has been living in Bouville for the last three years. He picks up a stone and realises that the inanimate objects and events around him slowly creep up to him, threatening his own existence. This, according to his own mental perception, encroaches on his ability to define himself, which causes a sense of nausea.

The novel is basically Sartre's philosophical statement in novel form, and centres on the notion of absurdism - that there is no meaning in the world beyond what we give it. Technically, I agree with that, but unlike Sartre's protagonist, I don't panic. The world has no meaning, so what? Contrast that to Sartre's protagonist, who says, "The world has no meaning. Oh no, what do I do?" Maybe I am just more a hedonist, but the 178 pages of this novel was just very hard to read, since it simply narrates the worries of a narcissistic prick, panicking that he doesn't exist because of a simple stone, and arguing tooth and nail why that is not the case.

In my view, I couldn't care less.

In other words, I couldn't sympathise. Here was a protagonist, telling everyone that the sky is falling. But for what it's worth, it's all in the protagonist's head. Nevertheless, it was an occasion to reflect. I do agree that life has no intrinsic meaning - I wasn't born to serve a supernatural being or a god. But this conclusion doesn't send me into a frenzy trying to put meaning into life. Perhaps hedonism resonates more with me - that the primary aim in life is the pursuit of pleasure and happiness. Given that conviction, I suppose I cannot sympathise with Antoine Roquentin.

Anyway, I didn't like this book, and would definitely not recommend it to others. It is unfortunate that Sartre thought that this was his finest work. If that is the case, then I am afraid I won't be reading any of his other writings. I give this book 1 out of 5 stars.