Book Review: Conversation in the Cathedral by Mario Vargas Llosa 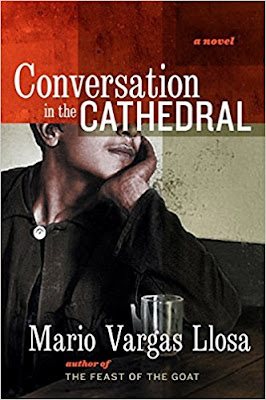 I devoured this book.

Mario Vargas Llosa is starting to grow on me. I've read 6 of his novels before, and Conversation in the Cathedral is my 7th book of his that I have finished. I must say I enjoyed reading this, and find this book to be one of the more complex yet rather accessible books of his. My previous experience tells me that Vargas Llosa's books are for me either relatively complex and inaccessible (such as my experience with The Green House, Who Killed Palomino Molero?, and Death in the Andes), or highly engaging and intellectual (such as The War of the End of the World, The Feast of the Goat, and The Bad Girl). Conversation in the Cathedral belongs to the latter category, and was a book that held me firmly in its grasp.

See, it employed tricks that Vargas Llosa has used in his earlier book, The Green House, which was published in 1966. Three years later, in the current book, he uses the same literary devices, where parallel conversations are decades apart, and the same character is referred to using different names. There are two main characters in this book, Santiago and Ambrosio. Santiago can also be Skinny, Superbrain, Zavala, and Zavalita. And while the book starts out as something murky, eventually things clear up, and the reader eventually sees which world belongs to which time, allowing one to make sense of the narrative. The book after all is one giant flashback: the two main characters are reminiscing about the years that have passed, as they are having a conversation in a bar called The Cathedral.

Aside from commenting about the narrative devices that were employed in this novel, I also find it a very good study of Peruvian society. I don't really know Peruvian history: Peru was too far away from my area of knowledge, so as a child I didn't really learn about historical events that were happening in this country. I didn't have a particular interest on the country, with the exception of Peru being the first place I wanted to go to in South America, because of Machu Picchu (though it ended up that I went to Ecuador first). Anyway, this book allowed me to see a little bit of Peruvian history, from the eyes of its population. It is after all a story of human decay and despair, a story of resilience, and a story of perseverance. There is an expression in Filipino that when translated literally, means "holding on to the blade". It is a metaphor that means that people can go to desperate measures when they have no more choice left. This novel is exactly like that, depicting various people from different slices of society, being desperate little by little, as the government oppresses them more and more.

Like I said, I devoured this book. And I think you will too. I definitely would give it 5 out of 5 stars.