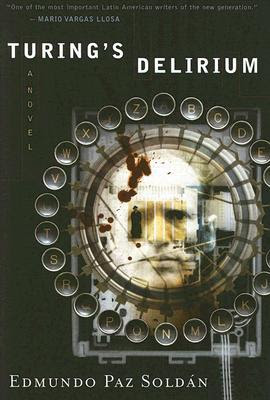 I picked this novel up because I wanted to broaden my horizons. I noticed that I haven't read a book written by a Bolivian author, so I searched for Bolivian authors and found Edmundo Paz Soldán. I decided to pick this book up as it sounded interesting. It is after all, as the critics say, a book that would have been written if William Gibson were a Bolivian.

The story is a thriller, set in Bolivia in the near future. The story sort of revolves around Miguel "Turing" Saenz, a veteran cryptanalyst working for the Bolivian Intelligence Agency, or Black Chamber. The Black Chamber is trying to catch a cyberhacktivist, Kandinsky, who seems to be behind the chaos that is slowly engulfing the fictional city of Rio Fugitivo.

The premise sounds good, but to be honest, I wasn't too impressed. First of all, there are too many characters. And perhaps as suggested by the title, everyone is delirious in the novel. Oh, and it takes off super slow.

So, the novel starts by rotating through the different characters and describing their perspectives. The chapters narrating the perspective of Miguel Saenz are written in the second person, giving the illusion that the reader is Miguel. The other chapters are narrated in the third person, plus there is the chapter describing the perspective of Albert (a paralysed delirious character) in ungrammatical sentences and fragments. There's also the chapters where the characters are in a virtual reality (Playground), and the reader is then tasked to map these virtual characters with the characters in the real world.

So given these multitudes of perspectives, the story takes off rather slow. After all, it takes one full rotation through the ensemble of characters to move the story forward. Heck, in my opinion, the first time a rather exciting and suspenseful event happens is in page 175 (end of Chapter 24). This is beyond the novel's halfway point, and given that the novel only contains 291 pages, it is rather late in my opinion.

It is not boring per se, it had enough things going on for the reader to persevere. But it is not the most gripping, that is for sure. In fact, I only got hooked at the last one hundred pages. My impression is that this is a story that takes off slowly, but slowly builds up chaos, to the point that at the end, everything collapses, almost everyone is dead, and voila, there is a cliffhanger ending. If this novel were an orchestral piece, I would probably compare it to Maurice Ravel's Bolero.

So I end up enjoying this book, but only when it nears its end. I am not sure how I feel about that. Would I read other works by Paz Soldán? Maybe, maybe not. I am not quite convinced at this point. I'll give this book 3 out of 5 stars.