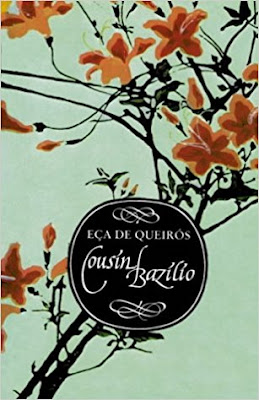 I rarely pick 19th-century Portuguese novels, but sometime ago I figured it's about time to revisit José Maria de Eça de Queiroz, so I picked up Cousin Bazilio. I read a novel of his 7 years ago, The Crime of Father Amaro, and I devoured that. So I was also looking forward to this one. And yes, 300 pages later, I must say I devoured this one too.

Of course since this is the 19th century, there is a division between the bourgeoisie and the servants. And yes, the servants are nosy, and while the bourgeoisie powder their nose and have social scandals left and right, the nosy servants already know about it and spread the rumours all across town. This is what happens with all the side characters in the book, but nevertheless there is the conflict presented in the form of Juliana, who is the asexual and ugly servant of Jorge and Luiza, who finds out about the affair, steals some letters implicating Luiza and Bazilio, and uses these letters to blackmail Luiza. This only leads to tragic consequences.

I won't elaborate how the novel ends (but there are deaths involved), but overall it shows how emotions can take over people, and how people can have psychosomatic conditions. Several people get sick, in a way that cannot be explained by modern 21st century medicine. The only rational explanation I could come up with is that these diseased people are diseased because it is a manifestation of their dark conscience. It's like they have a severe burden of guilt, and it appears physically in the form of a high fever.

I must say I am not a fan of Luiza. Perhaps it is because I could decouple sex and love, but I could definitely imagine myself having sex with someone else and not falling in love with this person. Luiza on the other hand cannot. Bazilio is the most insensitive man in the novel, and only seduces Luiza because he wants to fuck her, but when Luiza is not around, he is definitely an arrogant bastard, as is evident by his reaction at the very end of the book when he finds out that Luiza has died. He didn't even bat an eye, and instead he proposed to just go to a bar and get a drink. This is the type of man that Luiza considered running away to, in order to escape her husband. I wished Luiza would be a little bit more objective and rational.

In any case I definitely enjoyed this book, and would consider reading more of Eça de Queiroz's novels in the future. I give this book 4 out of 5 stars.