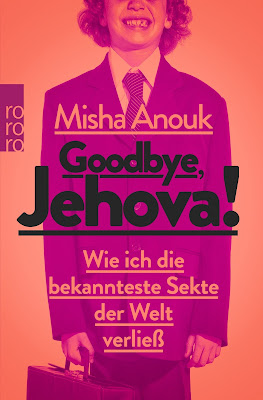 If you're a German speaker, and you want to understand how it is like living within the Jehovah's Witness cult, then this is a must-read. As a cult survivor myself, I found reading so many parallel experiences and events with the ones described in this book. Yet reading it in German provided a different experience for me: since German is my fourth language, reading it in a language that I don't have the most grasp of made it feel like I was reading it as an outsider. And yet there are so many occasions in which I could reach back to my memories and feel that yes, that was indeed how it was for my case as well.

See, this is a memoir by Misha Anouk (a pseudonym: real name is Mischaël-Sarim Vérollet). I first didn't feel like reading such a book, given that I already have my own experiences to boot. Nevertheless, my attention was piqued when I learned that the legal arm of the Jehovah's Witnesses, the Watchtower Bible and Tract Society, was actually suing the publishers of this book, hoping that they would stop publishing it. So I figured I better read it in case it becomes out of print.

In any case, it is a fascinating read, and I definitely recommend it to anyone who is interested in learning more about the supposedly harmless group of people who sometimes knocks on your doors on a Saturday morning. In my opinion, they definitely aren't a harmless bunch, and is more dangerous than what you think.

See, looking back, it seems I had an easier time getting out of the cult than Misha. Misha, like me, grew up in a very devout family. His parents are exemplary in the cult's view. In my case, my father had a clergy position in the cult, and my mother also was exemplary in that she spent 70 hours per month preaching. My family was one of the more exemplary families. Like Misha, I also belonged to a foreign language group at one point, so his way of preaching (driving around the huge territory for hours trying to search for a foreign language speaker) was very familiar to me. What was different was that I left my home church so to speak. At 23, I moved halfway across the world to pursue graduate school, and with that, that was my ticket to escape. Unlike Misha, I was able to build a parallel social network, so that when it became more or less official (or rather, when it became obvious, since I never officially left based on the procedures of the cult) that I separated myself, I had a backup social network that was ready to embrace me, when my former social network started shunning me.

It was so bizarre reading all of these cult-internal terminology in German. I used to take these terminology for granted, like shepherding call, spiritual food, marked, and so on. Reading these terms in German made me realise how systematic and hierarchical this cult is, as they even have their own internal jargon all emanating from their headquarters in Brooklyn (which now moved to Warwick). It is definitely a world not unlike George Orwell's 1984, where the way one thinks is more or less restrained by the vocabulary provided to you.

We'll see what the future brings. Personally, I am looking forward to seeing how the next ten years unfold: it seems that the cult is hurting financially, and their empty promise of Armageddon being just around the corner is becoming more and more like a broken record. I pity people like my parents who more or less have wasted their whole lives being enslaved by such an organisation, throwing away their careers to the wind, only because they got ensnared by some group of quack doctors residing in Brooklyn. I am glad to have gotten out: if I remember correctly, they wanted me to just learn how to drive a tuktuk so that I could be a tuktuk driver in the morning and spend my afternoons preaching. Needless to say, that is so far from where I have come now.

In any case, I devoured this book. Definitely recommended. 5 out of 5 stars.